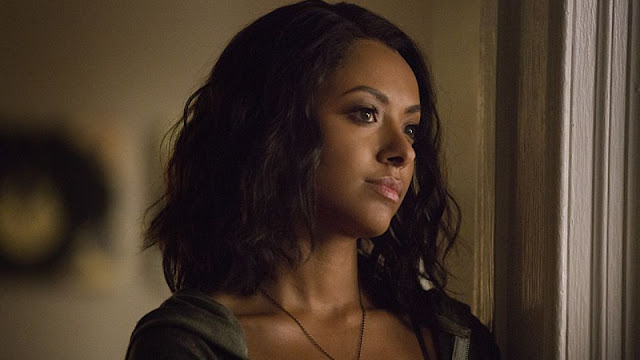 For the past eight years, it is Bonnie who has been our friend. She is willing to try anything for her friends to save them, often if it means she is the one who ends up being hurt. But that all changed in this episode...

Bonnie goes slightly rogue here and to be perfectly honest, it is about damn time. All the horrible stuff that has gone on her life, I'm surprised she hasn't gone rogue before now. She has already sacrificed so much for her friends and so there is no reason why she should prioritize her happy ending for those of Caroline and Stefan.

Her plan for rescuing Enzo didn't go exactly to plan, but when do they, this is Vampire Diaries! But her plan did give us more information on how Sybil's siren powers work: her mind control can cause brain haemorrhages and can make anyone, no matter how powerful, bow to her will. Oh and she gets extremely jealous of anyone who has ties to her pets.

Given this is only the second episode of the final season, we still don't know her big game plan but Satan and Hell have been mentioned quite a lot. Does this mean Vampire Diaries is going to pull a Supernatural and introduce us to the Devil? And is he going to be the well groomed, twenty-something-year-old that The CW love so much? Is he going to be played by someone related to Stephen Amell? What is his realm going to look like, how do the characters get there and is that where Katherine vanished too all those years ago? These are just some of the questions that I would like answered!

From what we have heard already on the show, Hell sounds awful, full of pain and grief and cuneiform tattoos. At the moment, the show is giving Hell a new resonance, something which Supernatural did before it allowed the characters to travel to and from it almost at will. In show's which reveal in the supernatural, death is never really the end, so maybe Hell will be used a torturous side-road on the soap opera lives that these characters seem to live.

This episode was mainly focused on the failed attempt to rescue Sarah Salvatore and much like Bonnie's failed plan, it went drastically wrong and raised the stakes that little bit higher. Not only because Sarah is now dead but because it has Damon further away from any hope of redemption. He doesn't even have the safe place to retreat to in his mind anymore with Sybil replacing Elena in the furthest corners of his mind. And now that Stefan really thinks that Damon is gone, does this mean he is going to stop trying to rescue his bother? Probably not but it should lead to some exciting scenes later in the final season.

But it is Alaric's storyline I am really confused about at the moment. Where is the armoury? I thought it was miles away in this show but the speed he manages to travel at makes it seem like it is in Mystic Falls. Do his interns know that the supernatural is real and are they getting college credit? But what is going on with the nanny? Alaric seemingly tells her everything that is going on during the day. Or will it transpire that she is some sort of enchantress mining him for information?

Above all though, this episode lacked the majority of the humorous Vampire Diaries dialogue. There was one instance which was nice as it reminded us that Damon and Enzo have a particularly unpleasant past. And while the more serious dialogue can be fun at first, this is the final season and only has 14 episodes left. Really, we need more. Vampire Diaries used to be so propulsive and felt urgent, rushing us to its satisfying conclusion when everything finally came together. Unfortunately this episode didn't feel like that at all...