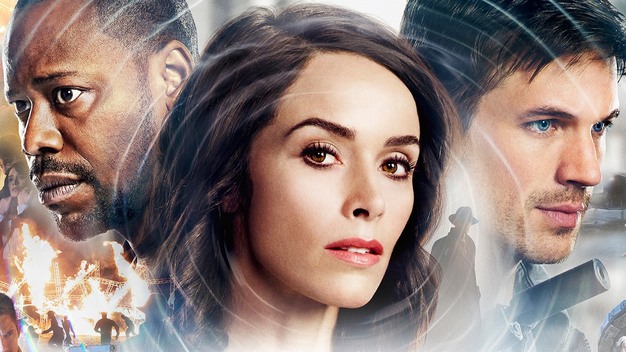 Finishing the pilot episode, which has only just been broadcast over here in the UK, Timeless knows it exists but what it doesn't know is why.

Coming from the hands of creators Shawn Ryan and Eric Kripke, (Kripke created the popular series, Supernatural), we get a very interesting programme. And it is an entertaining episode. It packs enough exposition, action, world building and mythology while still managing to crash the Hindenburg twice. It has some pretty solid fights and some of the most charming actors on television starring as the main characters. Overall it is a perfectly acceptable hour of television. And that is a good thing.

But what this episode lacked was substance. And that was alright, not ideal as it won't be to everyone's taste, but it works just fine. The problem with this episode, and I hope it doesn't effect the rest of the season, is that Timeless seems to not be aiming for but feigning at something more profound. And the pilot is a little frustrating because of this. It should have embraced the silliness as that was what it needed to be. It needed to embrace the fluff. And if moments of greater resonance come later, then it will be the topping on the cake. This episode has the trappings of a procedural programme, which doesn't help the story which is trying to be told. A show about time-travel can't be trapped by the layout of your average show. It can have a beginning, middle and then an end, but does it necessarily need to be in that order for a show like this. Of course it doesn't and unfortunately it gets the actors, producers, the writers and the audience, stuck in the mud.

There is a brilliant ambition here though to get a female character to be the main protagonist on a network show. Abigail Spencer plays the character who the main bulk of the plot will revolve around. But are Spencer's talents put to good use? Not really, she gets saddled with creating the character of Lucy Preston who, in the first six minutes is established as a, quirky-hip-plucky-feisty-but-sad-inside-history-professor-whose-mother-is-dying-and-boss-is-her-boyfriend, woman in the very first six minutes. And then she is stuck in a 1940s skirt and a blouse made from the incorrect fabric for the time and sent into history, with little time to establish her character as someone who is really interesting.

Abigail Spencer really is a seriously capable performer who is able to do a hell of a lot with the little material she was given. No doubt she really will get to show of her acting skills when she is given material that is really good. Lucy certainly is plucky, she tells one of her male companions to stop calling her ma'am within a few minutes of their meeting.

As well as Lucy, we meet the broody Wyatt Logan, played by Matt Lanter, one of the many stars this show has to give us. But Lanter isn't Spencer's only companion, we meet programme coder Rufus, played by Malcom Barrett, who does prove more of an interesting companion than Lanter. But like Spencer, Barrett is given some weird things to say. What I did like however was how the show wasn't afraid to acknowledge the dangers of someone who is from a different race travelling back through time were racism was mainstream. Many shows don't do this, it is something that Legends of Tomorrow does handle very well and I hope this show follows that suit too.

While the Rufus elements can be a bit much at times and it is a little oversimplified, Rufus's declaration of, "there is nowhere in American history is good for me," manages to be both amusing and true at the same time. And what is also promising is the show's willingness to take an occasional light touch, such as Rufus's mentioning having to sit at the back of a bus, even if it is met with cringe-worthy moments, like Rufus and Lucy's scene in the bar. Not everything that Ryan and Kripke have created has turned into gold, but neither of them are fools and there are moments in this episode which serve as a way of reminding us that the pair can knock things out of the park when they are given the opportunity.

However, from the pilot episode, this doesn't look like that sort of situation, I am hoping that this is going to be an incorrect impression because as flawed as it may have been Timeless did have a particular charm. What helped was the brilliant cast that who look like they could really take the show to brilliant heights when given material really worth their time and there are some fantastic production values. Alright so the crash of the Hindenburg doesn't look great the first time we see it, in fact it looks like exactly what it is, a woman running from a green screen, I let that effect pass. You try doing the Hindenburg crash on a television budget!

And Timeless isn't Doctor Who. But it isn't something like Chicago Fire either. In no way is it invested in its own strangeness but it is too weird to be your typical run-of-the-mill television programme. It isn't a failure but it isn't anything prestigious, not yet anyway. But that leaves us with a question about what Timeless actually is and that is something that the show itself doesn't seem to know...