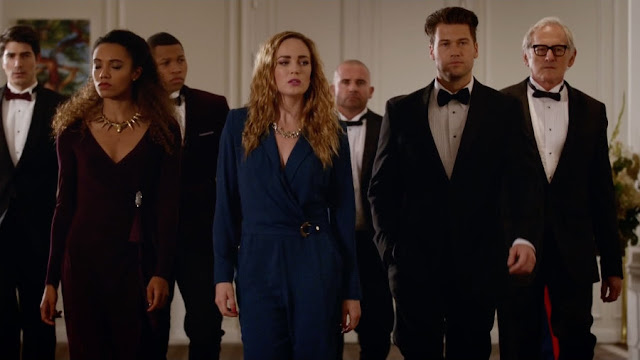 The second season of Legends got off to a great start but managed to lose its momentum after the brilliant opening two part story featuring the Justice Society of America. Since this story, they have been travelling about, bouncing around from one time zone to the next, with little to nothing in the way of an overarching storyline to accompany it. This changes in a big way in Compromised and between the 80s setting, the small return of the JSA and a better focus on Damien Darhk and Eobard Thawne, there is plenty for us to enjoy in this episode.

It is clear from the opening sequence, with Darhk in his full Miami Vice getup that the cast and crew had an absolute ball with the 80s setting. This episode does a brilliant job of celebrating the era with the fashion, soundtrack and the retro Channel 52 news broadcast. The setting also worked well with the Darhk/Thawne conspiracy. And the idea that Darhk would want to worm his way into the Reagan presidency to get his hands on nuclear weapons is something that fits his character perfectly. And this episode gives the whole season a mystery to unravel, the two villains are gathering artefacts for some mysterious purpose. But what is it?

Neal McDonough gives us an electrifying performance, he is so much fun to watch and his dynamic with Matt Letscher's Thawne is really entertaining as well. I am happy that this show is giving Darhk a second chance following the dull story that was the fourth season of Arrow. The story here also ties in with Darhk's motivations and his ultimate fate in Arrow. The episode ended with a fight between Darhk and Sara as Sara tormented him with the knowledge that he was doomed to fail and lose everything. It was finally a nice little bit of vengeance for her to have but it does feel like she is exacerbating the situation. Now Darhk is committed to rewriting his fate and who only knows what kind of impact that will have on the timestream!

I was pleased to see Obsidian getting a chance to be in the spotlight in this episode, especially with the older, grizzled version of the character, played by Lance Henriksen. But that was perhaps the problem with this episode. It had nothing to do with Henriksen, watching the episode I don't know who I would have rather chosen to play the role. It was an issue of space. Obsidian wasn't in the episode as much as I would have liked and the script did little to go further back into his troubled background. It seemed that there was plenty of untapped potential here, especially because Todd is the last surviving member of the Justice Society. It was just disappointing that Henriksen didn't really have a lot do, or many characters to interact with.

And there was no talk of Obsidian's parentage. Given that there is a connection between Obsidian and the Green Lantern, Alan Scott, I hope there are plans in the works to explore this later on in the season. Hopefully Henriksen will return in a more prominent role and the show can explore that family.

While this episode was a little bit Obsidian light, it did give us some solid character arcs for several of the Legends. The fight between Darhk and Sara capped her ongoing struggle to deal with the death of her sister and the fact that preserving the timeline is more important than her selfish desire for revenge. With this, she finally seemed to have cemented her role as the new leader and guiding force of this team. Ray continues to struggle finding his purpose now he is without his suit and the dynamic between Ray and Mick has been terrific and it has grown more entertaining now that Mick has taken it upon himself to train Ray. Brandon Routh's charm is a perfect foil for Dominic Purcell's grumpy Mick and it was surprising that Mick was the one that was allowed the most growth in this episode. The stakeout scene offered us a poignant look at a man who is still grieving over the death of his criminal partner, and is struggling to figure out how to express himself. And I am looking forward to seeing the return of Snart and the impending trauma that is going to inflict on Mick. (Oh, and how adorable did Nick Zano look in his 80s outfit!)

And this proved to be a big episode for Professor Stein, as once again, he encounters his younger self and struggles to keep his marriage from falling apart because of it. Alright, this subplot was pretty similar to the previous meeting between young and old Stein but it still worked. This was thanks to the heartfelt performance from Victor Garber. Here he gets the chance to play a character who is forced to confront the living embodiment of every mistake he has made. And at the same time, he now has the chance to reconnect with his wife during the prime of their romance. Stein goes through a very emotional charged journey in this episode and Garber channels those emotions nicely.

This episode manages to bring the story back on track and seeing Damien Darhk in the spotlight was a great treat. The same goes for Henrikson's Obsidian, even though the character was disappointingly underused. Luckily though, with some great character development on this week, it is tough to be really disappointed with the lack of story for Obsidian...