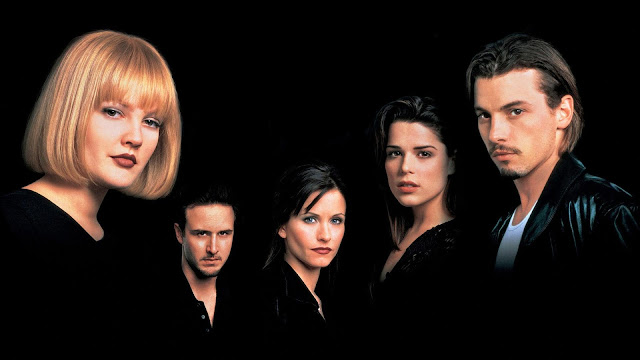 Originally released in 1996, Wes Craven's, Scream, violates the one golden rule of the movies, it is all about characters who go to the movies. And they know the stars of the movies with Tom Cruise, Jamie Lee Curtis and Richard Gere, all getting mentioned at some point, they are even watching Curtis in Halloween at the end! They also analyse the motives of the movie killers. Like did Norman Bates have a motive. Did Hannibal Lecter actually have a motive for eating people? And while Scream wasn't the first movie to feature characters who go to the movies, Clerks did the same thing, Scream is about something different. Films like Clerks is about a group who go about the act of going to the movies. The group in Scream has a knowledge about the movies they love. The characters are in and love horror movies. And because of this they know what to do and what not to do. One boy tells the others to never say, "I'll be right back. Because people who say that never come back!" From the birth of Horror movies, there was room for a film like this, I'm just surprised that it took till 1996 for a film to self-deconstruct itself, much like critics and viewers deconstruct the movies we watch.

What is clever is that instead of leaving the audience to identify the horror movie clichés, the characters do it themselves and talk about them openly. A character says, "Horror movies are about big-breasted blondes running upstairs so that the slasher can corner her. I hate it when characters are that stupid!" And what does the movie open on? Drew Barrymore at home on her own when she gets a phone call from someone who sounds like Jack Nicolson. She stands on the patio before going into the kitchen to grab a knife and I'm sure you know the rest of the drill!

After Barrymore is killed we meet Sidney, played by Neve Campbell, whose father has left her for the weekend. Her mother was murdered, a year ago on one of the days she is going to be alone! Already she needs to be careful! Her boyfriend has a tendency to climb in through her bedroom window and rumours of cult killings have begun to circulate in and around her school. The killer wears a strange white mask and calls himself "Father Death". More phone calls and murders ensue and the suspects include Sidney's boyfriend, her father and lots of other people.

It is only that which is the plot in the movie. But Scream doesn't need a plot, Scream isn't about a plot. It is about itself. These are characters who know they are in movies. They use clichéd horror lines like "I was nearly killed and filleted last night!" The girl has been rejecting her boyfriend's never ending sexual advances which, as it turns out, is just as well. As a character says, "Virgins survive horror movies." And he is right. If you watch many horror movies, it is the ones we believe are virgins that do survive. It is only bad boys and girls who get killed and when they realise that they are in the middle of a horror movie, they ask who would play each of them if their lives were turned into a movie. But despite its ironic in-jokes, the film also manages to work as a horror movie in it's own right. While it uses plenty of blood and gore, it has as many clichés as it makes fun of.

But the movie is also really knowledgeable in the way that television presenters are shown in horror movies. Courtney Cox, who was then starring as Monica in Friends, spends the movie asking brilliant questions. "How does it feel to nearly be the victim of a slasher?" And as savvy as she is, she suggests to a local deputy that they shouldn't drive to an isolated rural house down twisty country roads in the pitch black dark when a murderer is on the loose.

But what did I think of the movie? Overall I liked it, I liked the fact that there were in-jokes and the characters were self aware. But I was also aware of the blood and gore and the amount of violence, it is really violent. But the violence is diffused by the way the film uses it and comments on it. Some viewers won't be bothered by it. I wasn't. But some people will be. Could there be too much unnecessary violence here? Possibly...