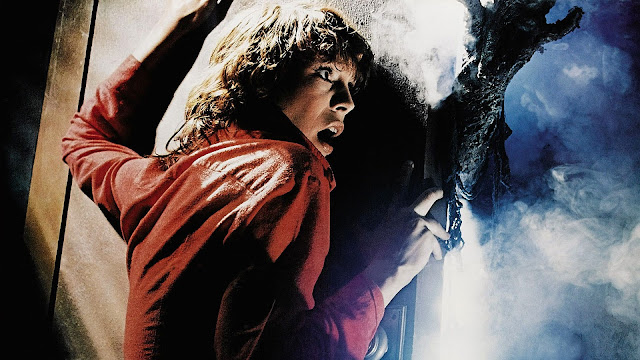 I wouldn't say I was a massive John Carpenter fan simply because The Fog is the only one of his films I have seen. But I know that by reputation he is considered by many movie fans to be one of the best directors and creators to ever dip his toes in the horror genre, given that he created the Halloween franchise and The Thing amongst others. Due to the low budgets he was given, he had no choice but to go into horror simply because it is one of the cheapest genres to produce. But boy am I glad he did.

The Fog is the first horror film I can remember really watching and loving every minute. I can remember my dad watching it on the television years and years ago and the final scene, with the ghosts in the church, standing amongst the pews will always stick with me. In that moment, I knew horror was my film genre.

It is common knowledge amongst fans of The Fog and the horror genre that the movie had a troubled production. It required late re-shoots and still received mixed reviews from critics when it was realised in 1980. But it did well in the box office and the majority of viewers enjoyed it. Surviving cast members still have people going up to them and telling them that The Fog was the first film that ever scared them!

I really adore The Fog and would consider it to be one of my favourite horror films I have seen. Partly for the nostalgia of the time I first saw it and because it is a bloody good movie! But why do I enjoy it so very much?

Like other Carpenter films, The Fog is an ensemble film and the performances from everyone involved are truly stellar. Not only are we treated to more performances from people who have worked with Carpenter before: Jamie Lee Curtis, Tom Atkins, Charles Cyphers, Nancy Loomis and Adrienne Barbeau, we get impressive late in their career appearances from Janet Leigh, Hal Holbrook and John Houseman. And Carpenter himself makes a brief cameo appearance in the beginning of the film appearing as the church's handyman. Though in these scenes we can see he isn't an actor as his line delivery is terrible!

The Fog is great at giving us more relaxed moments of character development, which it is unafraid of to embrace at length and allows the film changes to 'breath' before the next scary bit comes along. The scenes between Nancy Loomis and Janet Leigh and the heroes, Nick Castle and Elisabeth are great examples of the film getting a more 'real' feel to it and relax us just enough before something scary comes along again.

What also sets The Fog apart from other films that were released around the time of this one is its extensive use of location shoots. Carpenters use of North California pays off well, especially when we see the lighthouse that Stevie Wayne broadcasts her nightly radio show from. We really get the impression that Antonio Bay is remote, the perfect place for revenge seeking ghosts to get what they want!

As well as the great locations, The Fog is great at making little homages to previously made horror movies. The locations vaguely look like they been taken out of the Hitchcock movie Vertigo, while Janet Leigh's performance reminds us of her in Psycho. The final scenes with the ghosts confronting Father Malone and attacking the people seeking refuge by smashing their hands through the windows look like something from Night of the Living Dead, while Stevie Wayne's exclamation of "Look for the fog," sounds like "Watch the Skies". Even the narrative about hook wielding, revenge bent supernatural beings unleashing horror on a town full of unsuspecting people sounds like a story that is designed to be told around a camp-fire.

The camp-fire notion is even picked up upon in the opening moments as Houseman's character recounts the origin behind the ghosts to a group of children out camping. Its like The Fog knows its treading on well-worn narrative ground but it is reminding us to sit back and enjoy the ride at the same time while giving us some truly scary moments accompanied by a couple of nudges and winks! The film seems to know it is camp and yet it gives us enough pleasures to never make it old. You can really watch it over and over again and never get bored and it is very rare that a film does that.

Another triumph of this film comes from the performance of Hal Holbrook as Father Malone. All of his scenes are great and I really like the way he is dropped into proceedings as well as his self revelation at the end when I realises that he must die for the ghosts to finally vanish. In fact, every time Malone appears and chews the scenery is delightful as he is both the moral centre of the town and the most interesting character in the whole movie. I would say that the only moments to compete for most exciting moments in the film with Malone are the deaths caused by the film's vengeful spirits.

As the previous Carpenter films proved, the director really knew how to stage thrilling, horrific but not too gory deaths. It is surprising that there are relatively few but they are memorable! Easily the best death is the brutal murder of the crew aboard the ill-fated fishing trawler The Sea Grass. My favourite death scene in this movie comes when the wisecracking weather man Dan meets his end. The build up is tense and with some of Carpenter's previous movies, he isn't afraid to kill off innocent and sympathetic we are made to care about to show how high the stakes really are. And the deaths of Dan and the kind babysitter Mrs. Kobritz are good examples of this.

However, it is the killing scenes which are the weakest parts of the movie, given that the majority had to be reshot at a later date, they feel more like deaths from a slasher movie than a ghost one while the character building scenes don't feel like they belong in a Carpenter horror film. We also get some typical ghosty things going on like creeping fog and the ghosts that accompany it and while both these elements feel supernatural and creepy, they aren't shocking and scary. For some, the contrasting tones may render the film unwatchable and don't add anything particularly impactful for the final moments.

But for me, the different and often contrasting tones weave together well, mostly due to the inclusion of Father Malone who relentlessly hammers home the vile motivations behind the ghostly figures that plague the town.

For me, The Fog is a glorious mishmash of excellent casting, mixture of genre conventions and references to previous films. But is it the scariest film I have ever seen? Well when I was younger, yes. But now, not really. And even though I haven't seen any other John Carpenter films, I wouldn't say it was his best work either. But it is full of self aware pleasures, superb cinematography and has a few good scares that I still jump at even though I have seen this movie at least 100 times!

But is it worth your time? Absolutely!