Doctor Who: Whispers of Terror - Review 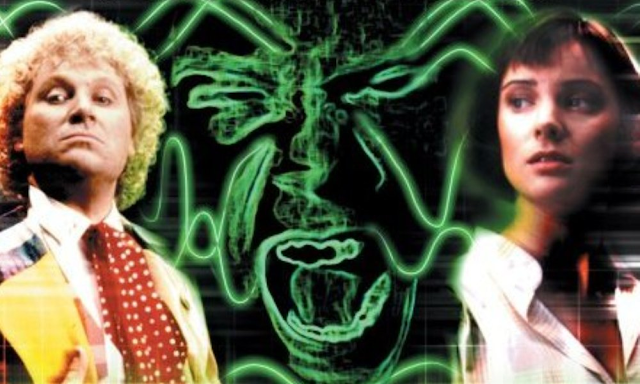 Whispers of Terror is Big Finish's third release, coming out in 1999, and it really showed Big Finish as a company who weren't afraid to stretch their wings a little bit. For them, much of the action must have seemed familiar, given that this story takes place in a series of recording booth's. But this move allows them to exploit one of the most familiar mediums.

The TARDIS brings the Sixth Doctor and Peri to, as Peri calls it, "A dim and dusty corridor". But that corridor is part of the Museum of Oral Antiquities, full of all recorded mediums. By chance, they have arrived in the eve of a memorial tribute to actor-turned-politician, Visteen Krane, in which there will be a broadcast announcing the name of his vice-president, who will take his place. But the crooked Beth Pernell, wants to use his death as her opportunity to become President, so she can finally enact her own nefarious policies.

But the whispers in the corridors seem to have a life of their own. There is someone twisting the words of Krane into things he never meant to say. And then there is the dead body.

Being the first proper Sixth Doctor story, Big Finish ever did, I was pleased to hear that Colin Baker's incarnation was just as bombastic as ever, though he had not yet mellowed into the role by this point. But that's alright, this was his first proper, proper story for this new company, we can cut him some slack at this point! And Peri sounded just like she did from the television series, which was good as she was a great companion! I didn't even recognise Lisa Bowerman as Beth Pernell! But this is probably because her take on Pernell was so good, that she shed the Bernice Summerfield character for two hours!

Everything about Whispers of Terror is ambitious, from its basic plot to its execution. And there is a fair amount of action. The whispering isn't so much whispers, but more screaming and shouting, Peri even mentions it at one point, but it is a welcome step into exploring the audio medium and the power it has to tell more involving stories than the visual medium does. I found it really surprising how the slight changes in Krane's speeches had in the overall plot and how it plays into what happened to the character. And there is a lovely little twist right at the end of the adventure, which was nice too.

But for some reason, there is little reason to be too enthusiastic for Whispers of Terror. This is because it has many of the same flaws that those early audio adventures had. The tale doesn't move too quickly, and there is little to nothing in the way of character development other than what is required to move the story along. This audio format as a story setting would later be explored in ...Ish and Live 34, those stories discussed language and live broadcasts. Because it explores the audio medium and shows us how it could be misused, this story only ever really merits as okay, especially when it is compared to the stories which came after it...

WHISPERS OF TERROR, STARRING COLIN BAKER AND NICOLA BRYANT, WAS WRITTEN BY JUSTIN RICHARDS AND RELEASED BY BIG FINISH PRODUCTIONS IN NOVEMBER 1999.