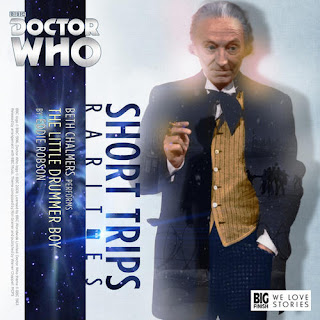 When Robert was eight years old, his brother Christopher tragically died from cancer just after Christmas. Devastated by the death of one of his sons, Robert's father leaves and his mother takes an overdose afterwards. When Robert inevitably finds her dead in the kitchen, he wanders outside into the garden and finds a crashed time-machine. The time-machine asks him where he wants to go. Robert remembers the last time he was happy, Christmas. Obligingly, the machine takes him on trips to visit great Christmases over the world and all through time.

During several of these journeys, Robert encounters a man called The Doctor and his companions, Steven Taylor and Sara Kingdom. He learns that they are trying to outrun a race of deadly aliens called The Daleks. They end up discovering Robert inside the time-machine, now a fully grown man. When they disconnect the older Robert from the time machine, the younger Robert steals the Taranium Core from the Doctor's pocket and the core pulls a Benjamin Button and ages the older man back to childhood.

The Doctor kindly takes Robert back to the last time he was happy, the Christmas just before Christopher died, his father left and his mother killed herself.

The Little Drummer Boy has been released by Big Finish as part of their rarities range, a series of downloads made available for the first time. They are stories which had only been used as incentives to subscribe to different publications or to Big Finish themselves. And now we can listen to them all! This story is real rollercoaster of a ride. Apparently, all the others, particularly Lepidoptery for Beginners is emotional. Each one has their different emotional moments. The Little Drummer Boy is a story about grief and the desperation we feel from time to time and our wanting to go back to moments where we were happy. I love stories by Eddie Robson, but this is really heart-breaking!

The reader for this story is Beth Chalmers, who really knocks the story out of the park. It is a male-centric story and she adds the correct amount of gruffness and bluster to Steven, and an almost reptilian feel to the First Doctor. She really makes the story come across beautifully.

The Little Drummer Boy also gives the listener the chance to hear more from Sara Kingdom. She may have appeared in only one televised story, most of which is now lost, it is through the novels and audio adventures that we learn about the character played by Jean Marsh. In this story, she is new to the TARDIS and unsure about how life with the Doctor and Steven will work. And she is always concerned that the Daleks will catch up with them. I really like Sara Kingdom, I wish she had done more television stories than just The Daleks' Master Plan. But for now, stories like this will have to do...