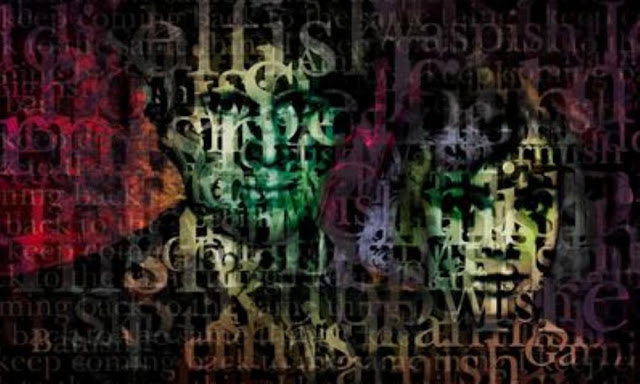 The Sixth Doctor and Peri arrive at a conference for lexicographers in time to see the release of the Lexicon, a massive dictionary of every single word in known creation from every know language. But trouble soon finds them when the Doctor's old friend Osefa, kills herself in a suspicious looking suicide. The one clue she leaves behind is a single note full of bad grammatical mistakes and errors. The Doctor soon finds himself investigating what he believes to be a sloppy murder and Peri makes friends with someone her own age who loves wordplay as much as she does. It is a shame then that he is a local radical who wants the ultimate freedom of speech, he wants to bring around the end of context and unity of the 'omniverbum', the word at the centre of creation.

Many fans of Doctor Who and the Big Finish productions name ...Ish as one of their favourites, the plot dancing on definitions and juggling concepts is irresistible for any word-lover. And it really is amazing how many definitions 'ish' actually has! And it is also a story which is perfect for the audio format and for The Sixth Doctor and Peri, both of whom spoke slightly different languages. They are the perfect Doctor/Companion for this story. Colin Baker and Nicola Bryant both rattle off dialogue others would find difficult with ease and manage to stay in character the whole time, not something every actor can do! However I think it must be said that this is a difficult plot to follow, it is so complex that I wouldn't recommend doing anything else at the same time because this story is going to mean to you otherwise.

Even though it is good, I do have to say that ...Ish, isn't one of my favourite Big Finish Doctor Who adventures. For me, I wasn't certain that the plot made perfect sense, however my biggest bugbear with this story was the resolution, the creature is sent away by the Doctor and Peri confusing it with the different words British and American people use for words, lift/elevator, trousers/pants, you get the picture, would should have been a brilliantly educational scene wobbles repeatedly. And I just don't find it plausible that a creature with as much power as it has would be confused by this when it is made clear early on that the Lexicon has every word and definition in the universe, it wouldn't take a rocket scientist to put the words together if the words are from every known language in the cosmos! And while I did enjoy it, this story had far to many inaccuracies for me to fully enjoy it...

...ISH, WRITTEN BY COLIN BAKER AND NICOLA BRYANT, WRITTEN BY PHIL PASCOE, WAS RELEASED BY BIG FINISH PRODUCTIONS IN AUGUST 2002.