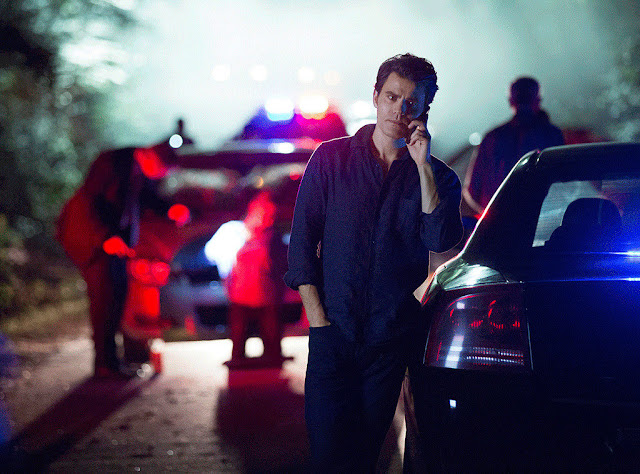 Well,  this is it. After eight seasons, we are finally nearing the end and there are only sixteen episodes left. The end is really nigh and we are left to wonder if The Vampire Diaries will go out with a bang or with a whimper.

And judging from this episode, this season sure shows a lot of promise. Damon and Enzo are no longer in control of their own free will and have become unwilling servants of a mysterious entity, who lives in a what looks like a massive swimming pool. Oh wait, it is something that lives in water, it is a Siren, a mythical creature who lead many a lusty sailor to their deaths. And apparently, Enzo too.

For a while, it took a me a little time to figure out how Enzo had left those clues for Bonnie to find. I guess he found out what it was, which was due to the three-year time gap. And this is why we keep getting flashbacks to Enzo explaining The Odyssey to Bonnie. Does it really make sense? Not too much, but does it really matter? Not really.

Enzo has given Bonnie enough clues so she can work out what she is going to have fight and she has just enough information to work out a plan. And now Alaric is the boss of The Armoury. Don't worry, he didn't sleep with the interns he has employed, he still has a complicated relationship with a woman who was once a student who then became the mother of his children through magic with his dead ex-wife's babies.

And speaking of that complicated relationship, I like the direction that the whole Alaric/Caroline thing is playing out. I think it is nice that the pair are co-parenting and it is also nice to see that people still struggle with juggling jobs and personal lives in Mystic Falls, somewhere where the characters never seem to take any time for school because of their soap opera-like lives. I was surprised though that Caroline would be willing to move away from her children as she started by making their sandwiches and ended it by moving out.

Could it be the almost irresistible lure of Stefan's hero hair, that persuades her to leave in the end? He is after all, in full hero mode and on the cusp of rescuing Damon. It makes me wonder, since this is the final season, if we will see the return of his Ripper personality.

And I wonder if Elena will come back soon, since she left the show has really been stuck in the mud, just the sight of an Elena flashback made this episode feel fresh again, she was the main character of the series, after all. Damon has switched his humanity off again, something he has done before, time after time. Is he stuck in the power of an ancient evil for the rest of his life? Will Matt ever return to series? Will Tyler? There are so many questions this season has to answer before the show is over for good.

I'm excited to see how this series pans out, given that for the past eight years I have followed the lives of these characters. I hope the heroes finally get their happy endings that they deserve. And frankly, the audience deserve a happy ending too...