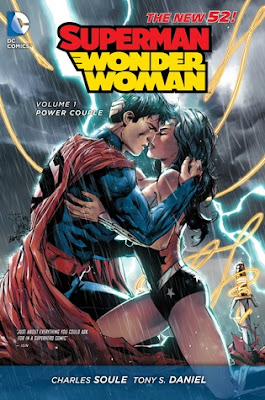 Out of all of the Superman tales to come from the New 52 range of books, Superman/Wonder Woman: Power Couple is easily the best Superman book out there. I think a lot of this is to the creative team who really knock it out of the park. What could have easily been a book about two powerful members of the DC Comic Book Universe is a hell of a lot more than just that. This is a beautiful book striking the balance between action and storytelling perfectly, and running through the theme of how a superhuman couple tackle saving the day and managing to maintain a relationship.

Author, Charles Soule, handles the dialogue wonderfully as he appears to have a knack for getting the dialogue perfect for two of DC Comic's biggest hitters. There is so much strength and wisdom in everything Wonder Woman says and Superman has some great insights in how keeping a human alter-ego allows you to maintain a relationship with humanity. And we get a nice blend of each character's supporting cast too.

On the art front, Tony Daniel is at his absolute best here. He is easily one of the best artists to come out of the New 52 range and one only needs to look at his amazing double page spreads to understand what I am talking about! Both Superman and Wonder Woman look iconic in every panel Both Daniel and colourist, Tomeu Morey go to together really well. In fact, their work is so good that the book deserves to be looked at just for the artwork rather than reading the story!

While Doomsday makes a splash within a number of these pages, but the real villains of the book are Zod and his wife Faora. I think they work so well because they represent the exact opposite of the title characters. Immediately, Zod establishes that he has escaped the Phantom Zone, while easily taking down heavy hitters like Martian Manhunter and Hawkman. There is a real sense that Superman is trying to find a brother in Zod but I'm sure we will all know which way it will go. And seeing Zod using Clark's ignorance of Kryptonian technology is an interesting twist. The final showdown is epic and goes out with a bang, literally. Oh and Lex Luthor makes an appearance and his reaction to finding out that Superman and Wonder Woman have been...doing it... is hilarious.

Batman also makes some sporadic appearances throughout the book, often to give Superman advice or just for some needed banter. That banter is priceless and is captured exactly right, giving each character a moment to shine.

This book is not only required reading from anyone claiming to be a comic book fan, it also sets up a lot of the story for the Superman: Doomed, tale. In fact, I would go so far as to say that it is just required reading, its absolutely essential...