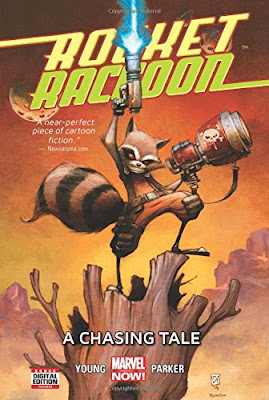 In the run up to the Guardians of the Galaxy movie in 2014, comic book author, Brian Michael Bendis, was given the task of re-launching their own comic book series. I'm pleased to say he did the job fairly well and made both the movie and the comics a hit for Marvel.

To accompany the printed issues, there were a limited run of four comics published for online devices with each issue focusing on a different member of the Guardians: Drax, Gamora, Groot and Rocket with Star Lord getting the first issue of the print comics all to himself.

The Rocket story finished with him realising that wasn't the last of his kind as he had previously believed. Author, Skottie Young picked up this plot thread and kicked off a new solo series featuring the Raccoon with the intention of further exploring this story. Guest starring Groot, of course, with the odd Other hunting Rocket down throughout A Chasing Tale.

I'd never seen Young's artwork before and when I flicked through this book, I wasn't sure I was going to enjoy it. I am not a big fan of Chris Bachelo or Humberto Ramos because I sometimes find their art style distracts me too much from the story. So it was a bit of a surprise when I found myself enjoying this book! I was worried that Young wouldn't have the writing chops to pull off a title on his own but luckily, it does read rather well and the first issue is brilliant with plenty of chaos, gunfights, imprisonment and villains to keep fans of the Guardian's series happy.

Perhaps I was expecting the level of intensity to keep up as the story went on but things do slow down, so maybe I was expecting slightly too much. But this book never gets boring even though it doesn't really reach the heights that it promises. What makes the book for me is the art from Young, which is nothing short of sensational. There are a couple of fantastic splash pages showing us Rocket and Groot escaping from prison and I also enjoyed the seafood Cadillac flying through space and the giant fish wormhole. Young has the vision, imagination and skill to pull these images off and there are some truly breath-taking pages to look at in there.

Young is also apparently telling a story through just visuals alone and this extremely evident in the final two issues that are collected in this volume. The Groot issue allows Young to really go to town as the giant space tree can only say three words, 'I AM GROOT,' so it is down to the artwork to really tell us what is going on here. This issue sees Young also joined by artist Jake Parker who is also particularly good. These two really deliver the goods and give us a great book.

Unfortunately, despite great artwork from Parker, the final issue is pretty forgettable. The dog, Cosmo, hires Rocket to aid some Transformer like robots break free from something or other. It has some good moments and I especially liked Rocket complaining that he never has a sidekick with any vocabulary as the robot can only speak in numbers. I suppose fans of the Abnett/Lanning, Guardians run can enjoy seeing Cosmo and Knowhere again but it didn't really do anything for me unfortunately.

Rocket is obviously the brash and charming ladies man of the universe, sometimes putting Star Lord to shame and feels like the animal equivalent of Han Solo. Luckily, Young does try and give Rocket a more rounded personality. As we saw in the movie, we have a few unexpectedly touching moments which emerge when we catch glimpses of his inner self that are at odds with the wild, whacky and fun character who sets the overall tone of the book. But Young doesn't explore the more touching side of Rocket to much as he settles for a more sill and over the top action stories, which I suppose, at the end of the day, sells comics.

Overall there are a couple of good issues collected here and it is nice to see that Marvel have the guts to publish a solo series for a character that the general public will probably never had heard off. The script is easy enough to follow but it doesn't really push boundaries as much as I would have liked. And the humour can feel a little forced in places like it is trying too hard. But with consistently strong artwork throughout the entirety of the book, it is really worth checking out and everyone involved should feel immensely proud of it!