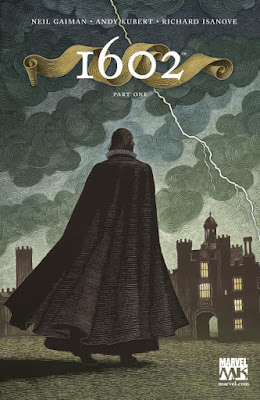 I'm sure for many Marvel Comics Fan's 1602 is absolute classic. Unfortunately for me, it isn't. And the main reason for this is the following question, why? Why do we need this? It doesn't contribute anything to the characters we know and love, and why does it appear to be interesting to reinvent our characters in the Seventeenth century? Why is this interesting?

Author Neil Gaiman is a highly regarded author, publishing books as well as comic strips as well as episodes for multiple television shows. Personally, he is an author I don't get. Its not that I don't get him but I don't understand what is going on in any of his works. Most of his works feature a mix of history and mythology and 1602 is no exception. Something I did like about this book was how he brought new elements to the characters we know and love as retaining their defining qualities. So of course Nick Fury isn't in charge of SHIELD but is in charge of Queen Elisabeth 1st's intelligence operation. And Daredevil no longer hangs out in Hells Kitchen but works as a rather bad spy for Fury.

Now I love historical adventures. I love history. But the political intrigue in this novel just failed to grab my attention. Maybe it was the idea of sticking superheroes in a time full of people who aren't, that made the book fall flat for me? I like to see people I can relate to or aspire to be walking through history and getting entangled in history which is unfolding around them. The book seems to go one way but ultimately doesn't really deliver, just dumps all of our heroes on the lost colony of Roanoke. Are they the reason why the colony was lost? It isn't really explained.

Artist Andy Kubert, again has never been a favourite of mine, but he manages to get across the gritty quality of history and I found his dark tone strangely enjoyable here. For once, I enjoyed his art work as it did what comic book art is supposed to do, give the reader the atmosphere, a sense of time and a mood. Richard Isanove's colouring does complement Kubert's art well and the pair of them deliver a wonderfully gothic looking novel.

While the art worked for me, which is odd because it came from the hands of Kubert, I didn't enjoy the story side of it. There are two many questions that weren't answered for me and I found it so dull in places that time seemed to drag on around me.