Doctor Who: Rise of the Cybermen Review 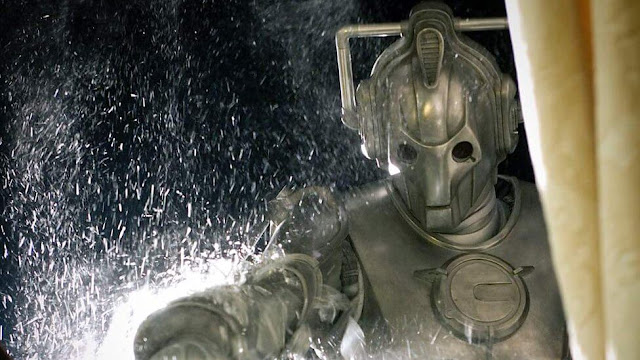 When something goes wrong with the TARDIS, the Doctor, Rose and Mickey find themselves trapped on a parallel Earth. There are zeppelins in the sky and the homeless have been going missing. Oh, and Rose's father is still alive. But not only is he alive, she finds that all his little money making schemes have worked and he's rich.

This episode plays with people's need for technology with everyone devices known as EarPods through which they can obtain all their daily information. However, the EarPod creator, John Lumic has other ideas and ulterior motives. He can use the EarPods to control the entire population of the world.

In science fiction, parallel universes are done all the time but here it feels new and fresh because they chose to focus on the characters rather than what is happening around those characters. Rose's family on this Earth are extremely wealthy but her mother never gave birth to her. In this world, Mickey's grandmother is still alive and it was nice to finally give some strong characterisation to Mickey seeing as he has only really been used as the comic relief. We also meet his alternative universe counterpart, Ricky and he too, gets some significant screen time. Rickey is a resistance fighter with a group who call themselves, The Preachers. The Preachers have rejected John Lumic's creations and found themselves on the wrong side of the law. It was also interesting to see a different version of Rose's mother Jackie, who is extremely snobby and entirely caught up in her wealth. Peter Tyler instead seems a lot more in control of his wealth and down to earth. And, while it may look like Pete is working for Lumic, he is secretly feeding information to the resistance under a disguise. With considerable focus put on Rose and Mickey, the Doctor gets less screen time but David Tennant makes his presence felt in every scene he is in.

But the real highlight of this episode is the return of the Cybermen. In this incarnation, the mechanical creatures are created by Lumic as a way of achieving immortality. Using his EarPod creations, Lumic gains control over everyone in London and makes them submit voluntarily to be turned into Cybermen. The Cybermen themselves look great with a perfect mixture of old and new. It was delightful to see that the producers decided to keep the handlebars.

As with any two part story, we need a great cliffhanger and Rise of the Cybermen sure as hell delivers in the scope department. When the Cybermen invade Jackie's birthday party under the orders of John Lumic, The Doctor, Rose, Pete, Mickey, Ricky and the resistance escape into the grounds of the house only to be surrounded by an armada of Cybermen. The final line is sure to go down in Who history as one of the greatest moments, surrendering, the group are told, "You will perish under maximum deletion! Delete! Delete! Delete!"

The episode manages to be an original, yet engaging story that features a triumphant return for one of the Doctor's deadliest foes. We also get some nice little nods to previous Cybermen adventures including a mention of International Electromatics. Its a scary thought that somewhere on that world, Tobias Vaughn, a man who once tried to aid a Cybermen invasion is still alive...