Doctor Who: The Android Invasion - Review 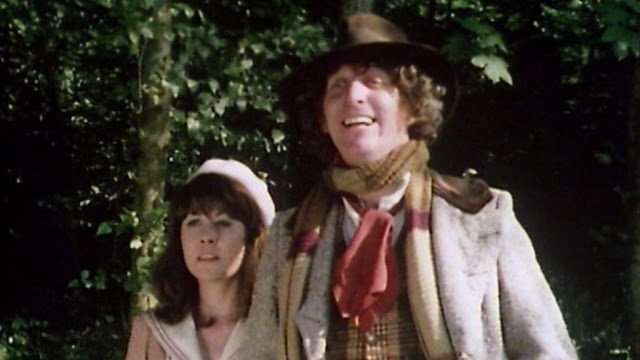 Throughout his time on the show in the 1970s, Terry Nation had been a bit hiss and miss with his stories and one can't help thinking that everything that did go well for him was either because he went back to old ideas as Planet of the Daleks was full of them or like Genesis, someone else almost entirely rewrote the script. But is The Android Invasion more of a miss than a hit? 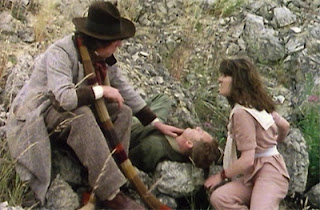 The Doctor and Sarah Jane arrive in what looks like a woods on Earth but they quickly find out is the planet of the alien race, The Kraals, who are in the final stages of planning an invasion of Earth by recreating the Earth village of Devesham and its nearby Space Defence Centre. But they haven't just recreated the village, the people too have been copied. And it seems that everything has been recreated using the mind of the lost astronaut, Guy Crayford. And of course, it is up to the Doctor and Sarah Jane to put a stop to it.

Looking at stories like this, it is important to remember that during the 1970s, these shows were made to be watched once, with a possible repeat in a few years time. The producers at the time had no idea that there would be such a thing as VHS and DVD's for people to watch the stories time and time again. Therefore, the shock value of realising that they weren't on Earth but the Kraal planet would have come as a surprise because the revelation three weeks before wouldn't be fresh in the viewers mind. And that was clearly what Terry Nation, Phillip Hinchcliffe and Robert Holmes were banking on, they had no idea that one day, fans could watch these stories whenever they felt like it.
But now we can and we can see how little this story makes sense... 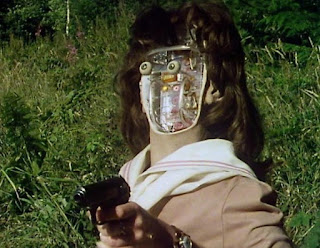 The main problem with the story is the whole Kraal plan. Their planet is dying of radiation because the levels of it have reached intolerable ones. They have developed some impressive technology including the ability to warp anywhere in space, create viruses that will wipe lifeforms out in a matter of weeks. So with their high technology, you would think that it would easy enough for them to invade and conquer, right?
Instead, they settle for a secret invasion and destroy humanity with the virus before they are even discovered. And they are banking the whole success of the plan on the brainwashed astronaut they picked up and captured, using his knowledge of the town he was stationed at on Earth. The set about brainwashing him into thinking that he has been left for dead. But they don't just leave it at that, they tell him that they rebuilt him but there was one eye that they couldn't find and he has to spend of his life wearing an eye-patch. Why didn't they remove his eye instead of praying to god that he didn't try to take the patch off for the past two years?
They have brainwashed the astronaut and he doesn't like humanity, the rest of their plan resolves on replacing key figures in the space station with android duplicates.

With me so far? 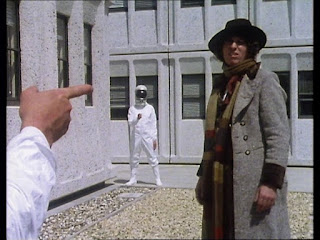 They've got their contrived plan of conquering the Earth in motion and they are playing out the final stages. They've recreated a small village seemingly from just the memories of Guy Crayford. They have all the people set up in the space station, presuming the Earth ones haven't switched jobs and they've replicated UNIT personal too.
But that isn't enough as they recreate the village in perfect detail, there is freshly minted money, a calendar that only reads July 6th, an unused dart board and everything in between but why, it isn't made clear. And they go to the trouble of creating android dogs, presumably in case someone like the Doctor comes along. And then, once the plan is finalised, what do they do? They destroy the entire replica village in what must be one of the biggest wastes of intergalactic money we have seen on the show. And then they assume that the humans at the space centre will believe that Crayford survived two years in deep space with nothing to drink but his own recycled urine?

But why didn't they go to another planet, that wouldn't have been too difficult as their ships have the ability to reach the Earth at warp speed in a matter of hours. And if they still wanted to destroy Earth, then why didn't they just do it from space?

Their plans just make no sense whatever and it doesn't matter how one tries to explain them, they deeply compromise the story and because of this, there is little in this story to be positive about. 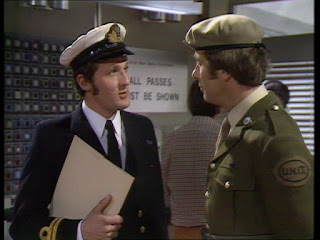 But The Android Invasion marks the end of the UNIT era and although they do turn up again in The Seeds of Doom, those characters are unnamed individuals who might just as well be the normal army. This is the last time we see the usual UNIT guys and we say goodbye to Sargent Benton and Harry Sullivan. But this story gives us the impression that this wasn't supposed to be their final story given that there are no real goodbye scenes.

If there is one thing to be positive about this story it is the performance of Milton Johns as Guy Crayford. Unlike many actors who have played villains in the series, he does a good job of making you not like him. Whether you consider it to be fortunate or not, Johns naturally looks like a slimey character and this aids his performance in this and his later appearance in The Invasion of Time.

Following on from the classic story, The Pyramids of Mars, this story wouldn't really hold up anyway. And while this story might not be the worse one the show ever created, the acting doesn't hold up, it is dull and poor.

If you don't look too much at the Kraal plan and set aside your disbelief for a few moments, then you are looking at a reasonably decent story. But it takes a lot of work to do that. Believe me...