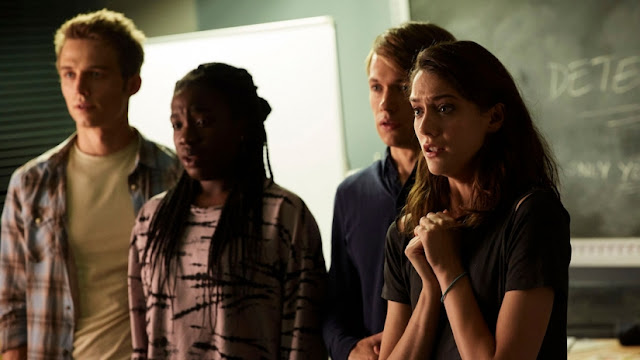 The previous two-part story, while epic in scale, was a little too bland for me. But I was pleased that Detained returned the series to form and dropped a massive bombshell on the rest of the series, with Tanya, April, Ram, Charlie and Matteusz, finding themselves in detention from Miss. Quill for some strange reason.

But in space, the arrival of a meteor through space causes a tear to open in Coal Hill, sending the small meteor into the classroom causing an explosion which separates the classroom from all resemblance of existence. The group find themselves trapped in some sort of limbo with no hope of escape. They quickly discover there is little they can do except solve the problem by themselves. But their emotions begin to spiral out of control due to the affect the meteor seems to be exerting over them. It begins by apparently making them tell the truth but soon there is a whole lot more going on and they find out they aren't the only ones who are being detained.

On the surface, this episode may be a bit of a slow-burner but what it actually does is allow us a great chance to see how the characters have adapted to their new lives, being the guardians of a rift which was, lets face it, a job forced on them, a group of people who wouldn't be friends otherwise, by the Doctor. But they really haven't adapted well as they begin to distrust each other through their feelings of being unappreciated making their supposed friendship questionable at best. Sure they are all in the same situation, but they haven't really bonded with each other yet, making saving the universe that much harder.

The essence of this episode is the eighties move, The Breakfast Club, with their conflicting personalities and problems driving the narrative forward. While they may be friends in detention, that doesn't really translate to the outside world, a point that the original movie made. Sure, the story might be told in a Doctor Who way but the main style of this episode is all down to the characters. This means that the script really has to make use of the actors. And each actor, once again, handles their roles brilliantly, each of them getting a moment to shine.

And then at the end there is a nice little teaser into the next episode concerning Miss. Quill. This show is certainly taking big risks but it is a risk that should make the next episode unmissable. But it is perhaps better if you watch this one first, to understand what is going on and because it is really, really good. In fact, I would go so far as to say it is easily the best of the series so far...