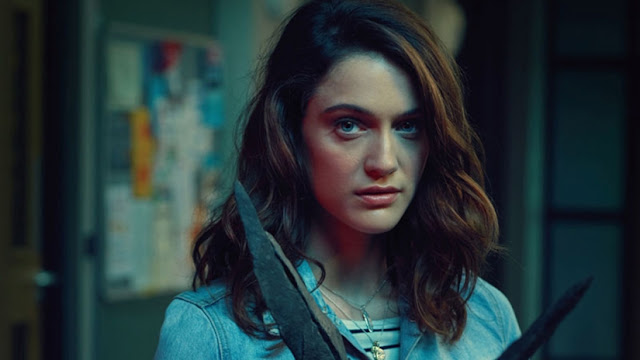 Co-Owner of a Lonely Heart feels a lot like the turning point for the series and it really feels like a series finale! With a new trailer that we have been treated too recently, this episode appears to be the moment where everything kicks off!

The two-part episode format as always been a tricky beast. One that Doctor Who hasn't always been immune too. One or the other of the episodes is usually brilliant, leaving the other episode feeling a bit flat. And while I can't really review the two episode format yet because the second episode hasn't been released but given that the majority will take place in a different setting, I'm hoping it doesn't fall into the traps that Doctor Who has fallen into so many times.

But this episode succeeds in being an entertaining piece of television. Like many two part stories it ran the risk of feeling like half a story. But that doesn't appear to be the case with this episode, as it provides us with plenty of entertainment and information to sink our teeth into. Already it feels different to the previous episodes as it obviously enjoys taking things slower as the drama unfolds between the two episodes. And the cliff-hanger doesn't feel incomplete but is pitched perfectly and acts as a really great tease for the next episode.

The episode shouldn't be reduced to the final moments as there really is a lot going on. There is a new headmistress who appears to know a lot about the core cast, including the ins and outs of their personal lives. Is she someone who can be trusted? I guess we'll have to find out. She is evidently something to do with the Governors mentioned at the end of The Coach With The Dragon Tattoo. And then there are the petal monsters. It looks like something from the Doctor Who universe is going to take something we see everyday and turn them into something dangerous. Though I am surprised given the opening episode was about the Autumn prom, why no one else wondered how they could blossoms from trees! Thank god for the new headmistress and Matteusz who asked the right questions!

Speaking of Matteusz, given the role he played in this episode, he is quickly shaping up to be one of the most important characters in the whole series. Surely he deserved to be counted amongst the regular cast from the very beginning? What was really good was seeing Matteusz and Tanya challenging the way Charlie treats Quill. It really forces us to look at Charlie in a brand new light and the supposedly peaceful world he came from. While this episode focused on April, I hope we get an episode where it explores Charlie's statement about judging the morality of his planet.

Sophie Hopkins gives a brilliant performance. She always had given brilliant performances but with an episode focusing around her character, she is really wonderful. She seems to effortlessly switch between the vulnerabilities of April and the pure rage of the King of The Shadow Kin. I'm glad we get to see more from her in the next episode as it was a delight to see so much focus on a character who up to this point, hadn't had a lot in the way of development.

Of course there are a few downsides to this episode. For me, the main one is the depiction of the Shadow Kin realm, which rises above nothing more than fire and brimstone. But the director, Philippa Longdale does an impressive job of realising the world of the monsters and makes it look quite stylish. And there is something quite gothic about their realm that does have a feel of an old teen-aimed TV show of the early 2000's. And that isn't a bad thing.

But this episode is yet another strong outing from Class. I really don't understand why so many people hate it, perhaps it is just for attention, I don't know but I really like it. It is just a shame that there is only a few more episodes left of this series. But if they are all as good as this episode then we are sure in for one hell of a ride!