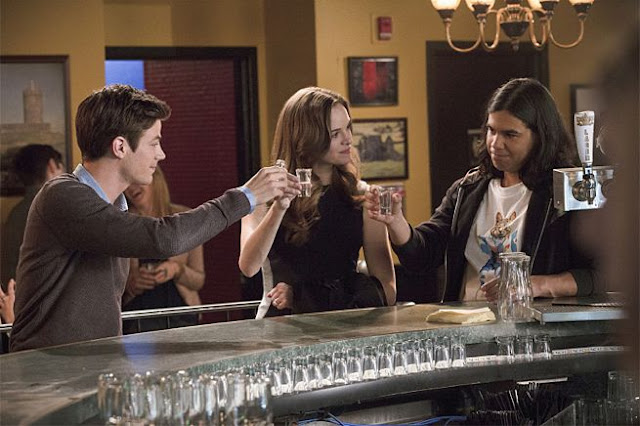 Plastique sees a human bomb walking around Central City. But isn't as simple as that, (is it ever with this show), and Barry is forced to deal with the metaphysics of friendship, love and evil.

If there is one thing this episode clearly demonstrates to the audience it is that it isn't going to skimp on the special effects or character development. And it isn't going to limit itself to the simplistic view on good and evil, it is going to explore the fact that sometimes, things aren't as black and white as they might first appear. This episode begins where the last left off, with Team Flash celebrating a serious win against Captain Cold and Barry is enjoying the fact that he actually has friends. But the celebration doesn't last long as a strange kind of bomb goes off and Barry speeds to the scene of the crime, the next thing we know, Grant Gustin is speeding away wearing nothing else than his underwear! Now, if that won't get you into the episode, I don't know what else will!

Plastique also serves as the first episode where Barry can be actually seen as the hero. I've been annoyed slightly by the Iris West character through the previous episodes but that was because she wasn't an inimical part of the story. It feels like her character has just been slotted into the action she doesn't necessarily have a part of being in. At this point, I don't see what Barry sees in her but it is through her eyes that we see Barry is growing up so I suppose that at this point, she is more necessary that I would like to admit.

As the title suggests, Plastique sees the introduction of supervillain, Plastique but in a clever twist, rather than being a proper baddie, she is ex-military who accidently became a Metahuman in the same accident that made Barry the Flash. Plastique is the first sympathetic Metahuman we have met and the writers handle her better here than she was when she appeared in Smallville. It becomes increasingly clear to Barry that his powers could have become just as painful as hers very quickly had he not had his friends and family around him. In this episode it is the character of General Eiling who is the true baddie, who wants to use Plastique rather than just killing her, for his own troubled ends. We see Eiling and Plastique meet for a final showdown at the end of the episode and it is in this sequence that Barry learns more about his powers, and if Plastique is kindly given some cracking special effects then so is Barry as he literally does the impossible and runs at super speed across water and up the side of a skyscraper.

But it is the secondary plot which focuses around Iris which annoys me about this episode. She is beginning to post on a blog about who she calls, "The Streak" mainly because she ignores Joe and Barry who are both right. If General Eiling is anything to go by then by posting about the Flash, Iris is putting herself in danger of being kidnapped by any of the Flash's villains.