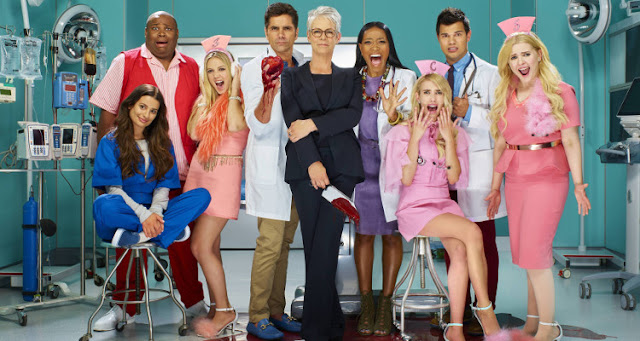 These are words I never thought I would say about Scream Queens, I missed Chad! That was one of the thoughts that kept on flashing through my head as I watched the first episode of season 2. What surprised me was that it managed to keep up the continuity with the fun but flawed first season. While there is there is a similar framing to the first season with another mysterious child involved somehow and a murder that kicks off the horror story, season 2 seems much more interested in mocking those TV hospital dramas than the horror tropes that it ripped off in the first season!

And while all that is fine, it just wasn't as funny as the episode which kicked the whole franchise off. The creators, Ryan Murphy, Brad Falchuk and Ian Brennan found a good reason to include the Chanel's in the proceedings alongside Zayday, Dr. Munsch and Denise Hemphill with Chad, Hester and others appearing later on. But with those guys virtually absent from this episode it allows newcomers Brock Holt, played by John Stamos, Cassidy Cascade, played by Taylor Lautner and Chamberlain Jackson, played by James Earl, to fill in the void.

But this makes me come back to Chad. Actor Glen Powell did such a good job of capturing the bizarre satire that was going on in season 1 that his absence here highlighted the sorry fact that the show isn't quite as sharp as the previous season. It had a strong start and finish and although it lost itself somewhere in the middle, it had a good horror story to keep it moving along at a brisk pace and stuck to the 'scream queens' premise.

And while there is no doubt that the way they ripped off hospital dramas was funny, I was left wondering how this setting was going to be a right choice for the show. It sadly feels more like a business decision, getting the story out of the educational environment and into something that would appeal to a wider range of audience, and turning it into another of this rubbish workplace comedies instead of something that is actually funny. There is something about it which doesn't feel as organic as the first season and the distinct lack of snarky political and cultural commentary made this opening episode lose the edge it might have had otherwise.

However, Jamie Lee Curtis is fabulous as Dr. Munsch, who uses her new new feminism platform to get herself an honorary doctorate which was taken away from Bill Cosby and she decides that after the university environment she is going to tackle America's flawed health care system by creating a brand new hospital with the hopes of finding cures to diseases deemed incurable. Everything about this premise is wonderful and really echoes the best parts of the first season as it is smart, often biting and is politically aware and allows for Curtis to show her acting chops with much pomp and circumstance.

But the rest of the premise is a little muddled. Munsch hires Holt and Cascade to be doctors at C.U.R.E. and then recruits Zayday who was so traumatised by the events in the first season that she is trying to put herself through medical-school. Zayday notes that despite Munsch's feminism, there aren't any females on her staff and is hired. This comment from Zayday makes Munsch get the Chanels for a slightly flimsy reason which I hope will be explored later in the season. At the moment it feels like a way to keep Emma Roberts, Billie Lourd and Abigail Breslin in the programme.

Following on from season 1, it appears that Hester later confessed on an award-winning Netflix documentary by Denise because she had no idea how double jeopardy worked. So Hester is sent to prison while the Chanels are freed. But they are shunned by society and are forced to take jobs in the medical industry in an attempt to do some good and make their image better again.

It is a pretty convoluted way of getting the old gang back together, a hospital that coincidently happened to be the side of a murder 32 years prior that apparently gave birth to a green masked serial killer. Like in season 1, I wonder if the murderer will be the baby of the murdered man or if it will be revealed that the strange swamp outside the hospital actually caused the discarded patient to mutate into some sort of monster.

While all the parts of the premier episode don't come together as well as they did for season 1, there was still some good humour and smart executions of concepts here. But there was something missing, something that was brilliantly done in season 1. I just hope that Scream Queens manages to find the spot-on-use of camp throughout this season too...