Doctor Who: A Handful of Stardust - Review 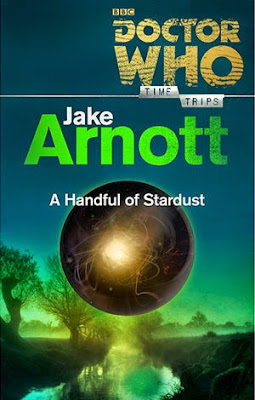 Something that is evidently flexible throughout the Time Trips range is the word count with some of the short stories ranging from 20,000 to 10,000. This leads us to conclude that either the BBC has been highly inconsistent or the authors couldn't actually write as much as they thought they could. I can tell you that if it were me, my Doctor Who novel would be bigger than the bible!

A Handful of Stardust is written by an author who I had never heard of before reading this, Jake Arnott. He picked the Sixth Doctor and his companion Peri to be the stars of this story and takes them to Sixteenth Century England. The story is passable and fun but ultimately forgettable.

I know it isn't fair to say something is forgettable but in the grand scheme of things, that will be what this story is. For me though, it is one of the best stories that this short lived range produced. Arnott manages to keep the readers on their toes as to the identity of the villain who I won't reveal for spoiler reasons, though the villains' plans are wholly unconvincing and the supporting characters don't rise above being pretty standard. However, the two human supporting characters, John Dee and Thomas Digges are handled brilliantly.

These two are people I had never heard of before either but, on further research, it turns out that that Digges was an advisor to Elizabeth 1 as well as being an astrologer, occultist, alchemist and imperialist. He was quite a dark man. Arnott writes Dee as someone who is easier to get along with, he is an affable, if occasionally uppity man, who doesn't question the interior of the TARDIS and doesn't take long to warm to the Doctor.

The Doctor is also well written, Arnott has evidently done his research on this under-rated incarnation of the Time Lord. Meanwhile, Peri is sadly overdone because she was never that American. While actress Nicola Bryant did the American accent, Peri never spoke much about her origins and Arnott uses a few too many colloquialisms that doesn't make this Peri match the one we saw on screen. One thing he does well with Peri is brings back the fact that she majored in Botany at college, something which was brushed under the carpet in the television series but is brought back here to great effect.

Due to the word count being limited, like the other stories in the range, the villains aren't really credible threats because they aren't given the room to be and the simple matter of throwing a few switches and pressing a button is what lets down A Handful of Stardust in the end. Still, it is a nice story to read and in my opinion, one of the best in the range...