Class: Series 1 Episode 2 - The Coach With The Dragon Tattoo - Review 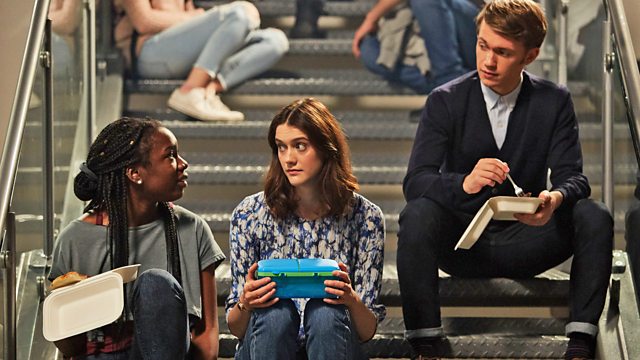 One of the things that Class promised to do was deal with the real consequences of earth shattering alien events. And following on from For Tonight We Might Die, Class continues successfully to explore the story surrounding Coal Hill School. Doctor Who would have simply moved on to another planet, Class stays put and deals with the ramifications from each episode.

And that is just what The Coach With The Dragon Tattoo does, it picks up, not too long after the end of the premier episode. But there is something that is really refreshing as it is a real departure from Doctor Who. Plus it was nice to see the characters dealing with aliens alongside dealing with their ongoing lives.

This episode really deals with Ram, played by Fady Elsayad and the trauma he suffered during the events of the premier episode. The episode has some real deep running themes of PTSD and insecurity as Ram deals with the death of his girlfriend and the damage done by losing his leg. Elsayad gives a brilliant performance and there is a real sense that Ram is a multifaced character, not just one who is two dimensional. He is trying to be brave in the face of danger while dealing with his insecurities in petty but somehow understandable ways. He does ultimately find solace in his friends. But from looking at Elsayad's performance I think that Ram is going to be one of the standout characters of the series.

Tanya, played by Vivian Oparah gets a lot to do and does an equally good job. The bond developing between Tanya and Ram is an interesting one because it hasn't really formed through alien danger but shared grief. In a show of this type, one expects the characters to quickly become fast friends due to the alien incursions they all have to deal with. This is referenced at the end of the premier episode when Tanya asks if they are all friends now. But one of the strengths of this series is that takes a different and smarter route, it seems to have chosen to allow the friendships to develop more naturally from the other aspects of their lives. And it is really brilliant that Class is placing characterisation front and centre, emphasising the development of the core cast. It could have been very easy for the creators of the series to coast over this development and leave the cast as the young adult stereotypes. But Class managed to immediately avoid taking this route and manages to include moments of growth and development for the characters amongst the alien dragons and tattoos.

The villain of the episode was a effective one, especially in terms of how it was approached. Class appears to have learnt from the best of Buffy, depicting the villain's story as one that mirrors the personal struggles of the main characters. This helps the story to feel more grounded and resonates with the audience on a more deeper level. The story of the dragon connects with Ram's own grief, the story functioning in a stronger way because of it. And it allows the resolution to also be an emotional resolution, as he deals with the dragon, Ram is able to begin processing his own grief. This really was an excellent piece of writing and one that certainly promises to set up high hopes for the future episodes.

There was one aspect of the story which didn't work quite too well and that was Miss Quill's subplot focusing around the robotic inspector. It is a staple of a show focused on a teenage audience to include the Ofsted inspector being an imposter. It is obvious that the show has a great sense of humour, Patrick Ness is obviously a very funny man. But this part of the episode's plot felt like it was lacking slightly. And while it does set up a question to explored throughout the rest of the series, just who are the mysterious governors? But this plot felt limited by that point that it appears to only exist to set up this question. And it has little relevance to the main plot concerning the dragon.

But ignoring the lacking B plot, Class manages to remain strong on virtually every front. The direction continued to be strong and I want to congratulate Ed Bazalgette for making the show as good as it looks. Even the CGI dragon looked brilliant as there is always a worry that something as big as an alien dragon could look naff. And in terms of visuals, this episode has a level of gore which far exceeds that of Doctor Who. But while it never passes into excessive, there are moments when it feels a little needless.

The Coach With The Dragon Tattoo is a firm second outing from Class and does a brilliant job of developing the characters, especially Ram and Tanya but it did set up a tough act to follow for the third episode...