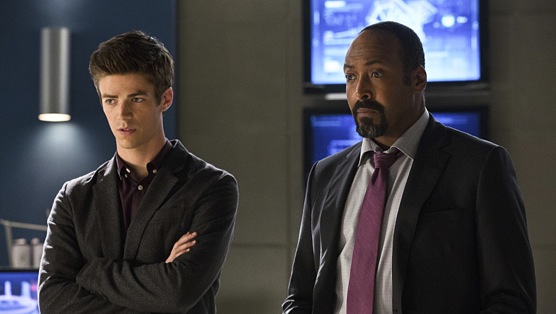 Running through the core of this story is the feeling of uselessness as we get to see what made our characters who they are today. And we are also confronted with the one universal truth, history will eventually repeat itself but it is how we deal with it that changes things.

In this episode the villain is The Mist, who is, I have to admit, pretty terrifying because of the way he goes about killing people. Actor Anthony Carrigan does a great job of realising this character, is he the man who plays Victor Zzazz in Gotham? He perfectly plays a baddie who character who can't believe he is still alive. And although the show is still littered with fantastic effects and a tight plot, what this episode really focuses on is telling us more about the members of Team Flash.

Usually with a series like this, we get a brilliant pilot and then a number of dud episodes. But this is another cracker of an episode with even the flashbacks being of a completely different nature to those we have seen before. Unlike the sometimes uneven sequences in Arrow, the flashbacks here really work and pack an emotional punch, in short, there is a reason for them to be there unlike in Arrow. And although we know about Barry's tragic past, this episode spends a lot of time focusing on Caitlin Snow and showing us she got that cold. And given that her comic book counterpart is the murderous villain Killer Frost, I imagine the show is going to go down a different route here rather than making her a baddie right away. Actress Danielle Panabaker shows us some serious acting chops wonderfully showing us how much Caitlin had changed, through her openness before the STAR Labs accident and how closed of she is now. Caitlin really comes across as someone who was hurt badly and is now terrified to open herself up again. But this episode shows her taking her first steps towards recovery. Cisco continues to grow on me and while he comes across as a nerd, his survivors guilt gives him a lot more depth.

One of the highlights of this episode are Barry's fights with the mist which are epic throughout the episode. Though I was left wondering why he didn't try to make a tornado to contain the baddie.

It is also apparent that the story arc will focus on Barry trying to release his innocent biological father from prison and particularly focuses on Detective Joe West's participation in these events now he is on the side of Team Flash. The sequence in which he is reviewing the interview footage is handled particularly well and we really feel his remorse for the way the police handled a situation that they couldn't control. And we are already getting some friction between Joe and Harrison Wells, both of whom are father figures to Barry. It is clear that Joe doesn't trust Wells and his look when they are discussing where to house the captured Metahumans confirms this mistrust.

Of course, now we don't know whether we are supposed to trust Wells as well or not. We learn that Wells had the ability to stop the accident at STAR Labs that gave Barry his powers prior to events. So while he might have come from the future, he still has a long way to go if he wants to change it...