Doctor Who: The Widow's Assassin Review 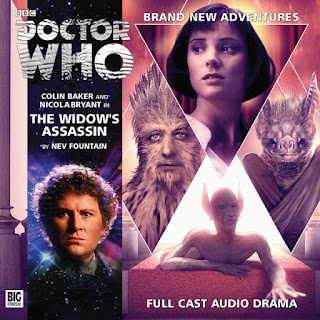 2014 saw the conclusion to one of Doctor Who's longest left plot threads that had just been left hanging in 1986, the fate of Colin Baker's companion Peri...

While companions were a lot more expendable in the 1980s than they are nowadays, there is denying that Peri's fate must have left viewers shocked at the end of Mindwarp. Peri is the unwilling victim of a brain transference experiment in which the Doctor appeared to be completely complicit. Her final moments saw her sit up on an alien hospital bed, completely bald with an alien voice coming from her throat. With the Doctor taken away by the Time Lords for his trial, she was left behind, an alien inhabiting her body. Unfortunately the producers then ruined that moment telling us that she was alive, the Matrix had been interfered with making the Doctor look guilty. We get told she survived the operation and left for the planet Krontep to become the bride of the bombastic King Yrcanos.

The Widow's Assassin takes this piece of information and gives it a delightful spin, making the reunion between the Doctor and his former companion a frosty one initially, with the balance of power shifted nicely into Queen Peri as she is a much tougher character with an agenda all of her own. The pair's reconciliation comes quite quickly as the story gradually unfolds, following Peri's attempts to foster peace between political leaders, one of whom is searching for a mate and at the same time, Peri is trying to solve the riddle surrounding her husband's untimely death.

Of course, coming from the mind of an author like Nev Fountain, things aren't simple and a story that ties in with Mindwarp and Peri's supposed fate are unravelled in a really surprising way. While there is no Brian Blessed as Yrcanos this time, we do get a cast of other extraordinary characters including the changeable pious Reverend Flitamos, the crazy Baron Pteratrack and the likeable Constable Wolsey, an augmented sheep! And somehow Fountain manages to make time to give Colin Baker and Nicola Bryant time to appear as the Sixth Doctor and Peri and give them both plenty to do and lets them have some fun too!

With some surprising twists and turns this story is also ludicrously funny with some talent show gags and some body swapping humour. But beneath all this pomp and circumstance is a deeper message, the striving for forgiveness when you have done someone some wrong.

The Widow's Assassin is a bold audio return for Nicola Bryant as Peri and it gives us some good belly laughs along the way. It set the bar high for the rest of the trilogy featuring the Sixth Doctor and Peri!