Doctor Who: Invasion of the Dinosaurs Review 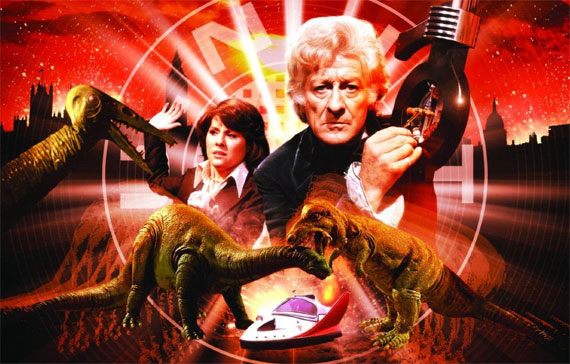 Returning to present day Earth following their adventure in the middle ages, the Third Doctor and new companion Sarah Jane Smith arrive in London to find it eerily abandoned. While they have been away, a mass evacuation has taken place which has left the city completely empty except for some looters and huge, lumbering dinosaurs that keep appearing all over the place. Somewhere, someone is using time travel technology to threaten the present day with the giant lizards but it is all to bring in a new, glorious golden age. Or is it? The Doctor finds he might not have enough time to stop what is coming, especially when he learns there is a traitor in the upper ranks of UNIT! 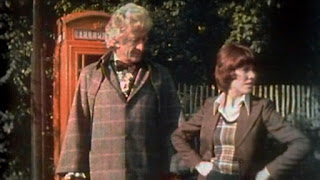 Invasion of the Dinosaurs has a bit of a reputation, mainly because of the puppet dinosaurs which everyone, including those who worked on it, know look awful. But even though the show doesn't have Jurassic Park like CGI effects, there is a lot about this story to recommend. Taking place during Jon Pertwee's final series as the Third Doctor this is one of UNIT's final outings before they faded away into history during the Tom Baker era. Usually, six part stories suffer from plotting issues but the author, Malcom Hulke gives us enough plot lines and details to keep things interesting. As usual things slow down a little during episode 5 and we are treated to a long chase scene between UNIT and the framed Doctor. Thankfully the show brings everyone together nicely for the final episode.

Like many of the classic Who stories, especially those in the Pertwee years, once you take away the dodgy dinosaurs, you are left with themes which are sadly still relevant today. This story features a group of elitists in high positions of power around Britain who believe they know best and interfere in the lives of everyone in London by imposing their values and beliefs on society by demanding that we turn the clock back to primeval times so that human race can have a second chance, even if it means killing millions of people in the process. We get some environmental commentary and a thoughtful coda on the true source of power. All the points brought up by the author get wrapped up nicely enough in an enjoyable Pertwee romp that is sure to entertain all ages. 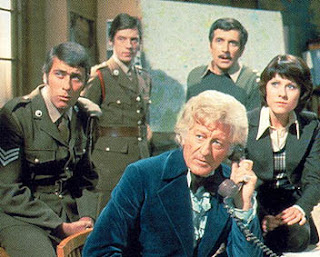 The cast is in particularly good form here. They are aided well by the excellent guest stars, Peter Miles as the weasely Professor Whittaker and Noel Johnson as the charming Sir Charles Grover. John Bennett is so sly as General Finch that you half expect him to pull off a mask and reveal himself to be the Master. In all fairness, this is what would have probably happened had Roger Delgado not been tragically killed a year before. Pertwee is nicely light hearted here as he smiles while running circles around his opponents. Unfortunately, Elisabeth Sladen as Sarah Jane Smith fairs a little worse. After her bold and brilliant introduction in the previous adventure, this strong woman's lib character is constantly being told leave the room or walking into the enemy hands telling them she knows everything. It makes you wonder if the script had been written with Sarah in mind or if the writer had the previous companion, Jo Grant in mind. But we need to give her credit for uncovering the entire plot and its key players. Her role here just feels like a bit of a come down. Thank god that the writers soon shaped up and made her one of the best written companions of all time. Its such a shame that she didn't stay forever! 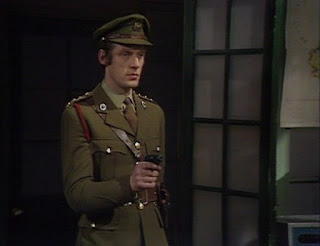 Nowadays secondary characters in television are just as important as the main ones but in 1974, this hardly ever happened. This story sees Captain Mike Yates played by Richard Franklin benefit suberbly from a surprising twist when we discover that he is the traitor in UNIT. He had been a steady and welcome addition to the UNIT family from his first appearance in 1971's Terror of the Autons and had been written as someone we could always rely on, someone we could trust, someone we call our friend. He was one of our heroes. So how could have done this to the Doctor and UNIT? There writer gives us some nice groundwork to answer that question, letting his glimpse Yate's ecological concerns and when we find out he is the traitor we learn he only joined the baddies because he truly believes what they are doing is right and will benefit all mankind.

Yates would appear once more in the final Jon Pertwee adventure, Planet of the Spiders in which he would get a shot at redemption. But at the time when this story was broadcast, the audience had no idea he would come back, it was a shocking revelation that shook up the show and took viewers by surprise way back in 1974...