Doctor Who: The Girl in the Fireplace Review 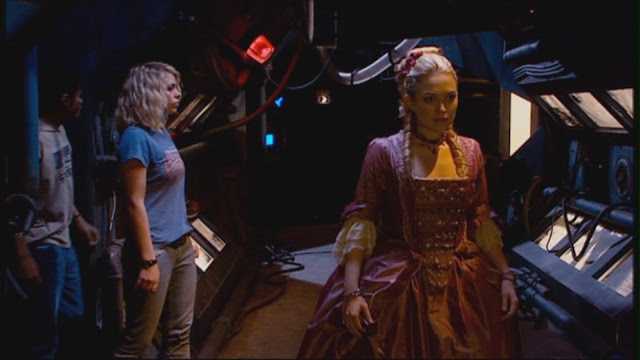 Once again, the Doctor meets a historical figure. This time, she is in the form of Antoinette Poisson. Poisson would one day go on to become Madame De Pompadour, mistress of King Louis XV. Here she is beautifully brought to life by actress Sophie Myles.

After watching this episode, one can dwell on all the time travel flaws a little too much. They won't stand up under scrutiny from Trekkies or various real life time travel scientists but really, if you suspend your belief, then the dramatic impact of this episode is enough to make it memorable. And with the exception of the flaws, this episode really is wonderfully crafted and poignant.

Where this episode particularly succeeds is the strength of the romance between the Doctor and Madame De Pompadour. David Tennant and Sophie Myles have a fantastic chemistry and Tennant does a particularly good job of being in love. The final scene is heart breaking as he returns to her one more time after promising to take her on his travels with Rose and Mickey only to discover he has arrived too late and she has passed away.

Had the writer given us an explanation as to why he couldn't have taken the TARDIS back to when she was alive then this episode would have been brilliant. Between each time he visits her, a considerable amount of time passes so, in theory, he could go back to any of those times and pick her up. But he doesn't and the reason for that is what this episode was missing.

With the inclusion of Mickey as a companion, the sense of awe about the show has been brought back as we get to see the universe through a fresh pair of eyes.

The Clockwork Robots are your standard Doctor Who creatures, frightening but at the same time, absurd. Obsessed with Madame De Pompadour, they need her brain to power their ship. Its a nice revelation at the end but it isn't handled as well as it could have been. It is almost as if the producers knew they were running out of time and didn't expand on why they specifically needed her.

The Girl in the Fireplace has enough great moments to overcome its obvious flaws. The tragic love story works remarkably good in a Doctor Who environment and its all thanks to Tennant and Myles. The pacing is excellent and the story is very touching. It is just unfortunate about all the time travel flaws that the script is full of. Had the producers paid more attention to them, then one day, it might be considered one of the show's greatest episodes...