Birds of Prey: The Battle Within - Graphic Novel Review 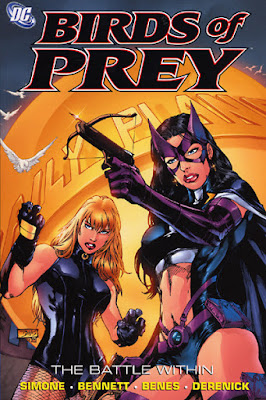 Though published by DC Comics in this graphic novel form in 2006, it is a book I urge people to seek out because it is so damn good! Anyone with an interest in superheroes should read this book and the entire Birds of Prey series which for me, this team is one of the best that DC Comics have ever created. One of the reasons it has lasted so long is because it features an ever changing cast of characters all organised by Barbara Gordon AKA Oracle. This book features Oracle, Black Canary and Huntress, possibly the longest serving members of the team. And the trio tackle some of the most devious villains and masterminds in the DC Comics universe.

This volume, which collects issues 76-85 of the old monthly series, begins with the gang living inside a super high-tech aeroplane and actively seeking out villains to stop across the entirety of America. Their first stop is Dayton Ohio, they find a traumatised schoolgirl who discovers that she can pay everyone who has ever been nasty to her by using any of the magical forces at work within the DC Comics universe. The gang then travel to Peo Ridge Kansas, where they take on a deadly new foe, Harvest, who can literally suck the life force out of anyone she comes into contact with but her favourite victims are men who abuse women. We visit Gotham next and check in with the vigilante Thorn whose one woman crusade against the criminal underworld in the city has brought her to the attention to the Birds of Prey. At first glance, all these stories appear to unconnected but we get a few scenes here and there which show Barbara becoming increasingly involved with the digital world, perhaps a little more than usual. And there is only one villain who has that much of a fascination with the digital world, Brainiac...

The final third of the book is taken up with a story featuring Black Canary and Wildcat who are trying to stop a drug deal which is going on in Gotham by apparently 'buying' the drugs from their source in Singapore. Obviously things don't go according to plan and we are treated to numerous fights and team-ups as the Ladies of the DC Universe try to stop the dealers while Barbara faces one more battle with Brainiac.

And the book ends on a nice note which left me wanting to read more of this series, Barbara, a woman who was left paralyzed from the waist down after being shot by the Joker finds that, after Brainiac is removed, can wiggle her toes. Could this a final gift from the remnants of Brainiac who Barbara promised to stay with until he died? I guess I will have to track down the next volume to find out!

Once again, author Gail Simone shows off her writing skills at being a master at creating action and adventure and women who are more than capable of holding their own. And with some great artists like Joe Bennett, Ed Benes, Tom Denerick, Joe Prado, Eddy Barrows, Jack Jackson, Bob Petrecca and Robin Riggs, I dare anyone not to say that these romps are not impossible to put down!