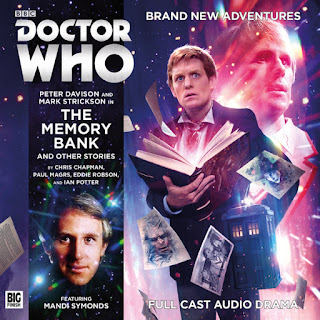 Doctor Who - The Main Range

217. The Memory Bank and Other Stories 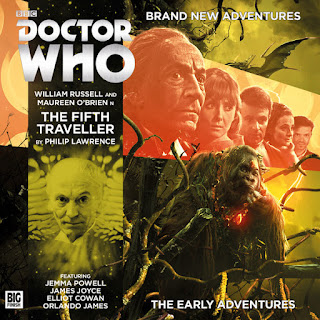 The Doctor, Ian, Barbara, Vicki and Jospa land the TARDIS on the homeworld of the Arunde. Emerging into the jungle that covers the planet and encountering the strange wildlife dwelling within, the travellers are unaware that the true rulers live high above them in the trees.

The ape-like members of the tribe are in trouble. The last Matriar's nest has been lost to the surface, and the people are hungry... Maybe these strangers may be responsible. And some believe they may be salvation.

The TARDIS crew are about to find themselves in the middle of somebody else's battle. But there's more at stake than even they can know. 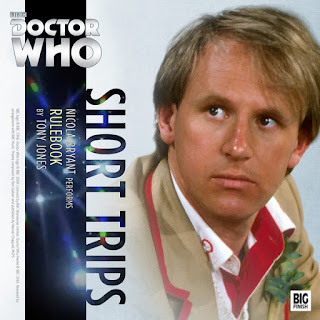 The Ellani of Beadledom 3 lived their lives in regulated harmony until they were invaded by the Valtor. Of course the Doctor and his new companion Peri were delighted to help out, but they didn’t know their biggest challenge wouldn’t be the Valtor army, but the Rulebook... 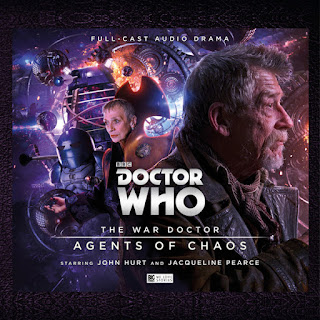 3.1 The Shadow Vortex by David Llewellyn
Cardinal Ollistra exploits the War Doctor’s affection for Earth to send him to East Berlin, 1961, on the trail of a Dalek agent. Lara Zannis has breached the planet’s quantum shield on a very special mission for the Dalek Time Strategist.
Caught between MI6 and the KGB, the War Doctor must first escape the Stasi before he can hope to stop Lara. Cold War scientists are about to make a breakthrough – the Daleks want control of the ‘Shadow Vortex’, and Agent Zannis can provide it.

3.2 The Eternity Cage by Andrew Smith
Sontarans are the ultimate warriors – so they believe – and the Time War the ultimate conflict. Denied that glory by Skaro and Gallifrey alike, General Fesk of the Eighth Sontaran Battle Fleet employs a dangerous strategy to draw both sides to the planet Rovidia and prove his forces worthy…
Meanwhile, the War Doctor leads a rescue mission, aided by Rovidian street-urchin Kalan. Neither Daleks nor Time Lords expect the Sontarans to be so fearsome a foe, until they uncover the secret of the Eternity Cage.

3.3 Eye of Harmony by Ken Bentley
In the aftermath of events on Rovidia, the Dalek Time Strategist is presented with a unique opportunity to strike a lethal blow to the heart of Gallifrey. A devastating power is set to be unleashed, and with agents in place ready to do the bidding of the Dalek Time Strategist, the future of the Time War could turn in an instant.
Trapped inside a critically-damaged Battle-TARDIS, hopelessly adrift in the Time Vortex, the War Doctor and his allies have a final desperate fight on their hands... 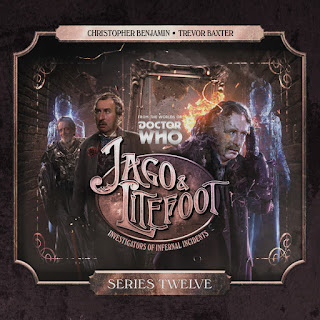 12.1: Picture This by Justin Richards
An art gallery is robbed, and the curator killed. That might not seem of interest to Jago and Litefoot. But this is the fabled Scarlet Gallery – where the paintings are said to be haunted. And the curator has been drained of blood, as if killed by a vampire.

Bizarrely, the only painting that has been stolen is in itself quite unremarkable compared with the others in the gallery. But even so, Jago and Litefoot soon find themselves caught up in events that could end in their deaths – or worse…

12.2: The Flickermen by Paul Morris and Simon Barnard
Jago is rather scathing of the new art of cinematography. Even so, he accompanies Litefoot to see a demonstration at a fairground. But this is no ordinary film. Can creatures live inside the film – or even escape from it?

Ellie recalls childhood stories about the ‘Flickermen’, and elsewhere people start to flicker in and out of existence. By the end of their adventure, Jago and Litefoot will themselves be film stars. But what they see when the film of them is shown will give them both pause for thought…

12.3: School of Blood by Paul Morris
Acting on a tip off about the possible source of the vampiric murders that are now plaguing London, Jago and Litefoot investigate a girls' school. Due to a misunderstanding, Litefoot finds himself offered a job at the school, while Jago keeps watch on Ellie who they both think is behaving oddly.
But before long, they both discover that all is not as it should be at the school. Can Jago and Litefoot track down the vampire before it claims more innocent victims?

12.4: Warm Blood by Justin Richards
Ellie tells Jago and Litefoot that she has been in contact with a group of vampires and can lead the investigators to them. But can they trust her? With more victims turning up, Jago, Litefoot and Ellie make their way to a house that is supposed to be haunted, and which could be the vampires’ base of operations.

But what they find there will surprise and horrify Jago and Litefoot. Can they survive their encounter with the vampires when the Old One has decided that they must die? 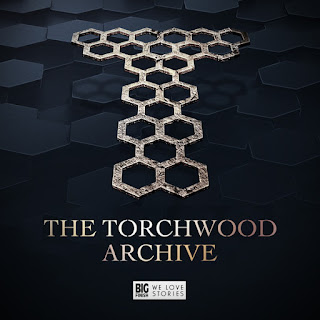 "Welcome, visitor. The Torchwood Archive provides a complete history of our Institute from its distant beginnings to the present day. When we founded our great enterprise in the year of our Lord 1879, we decreed that there should be a record of this achievement, stored at the very furthest limits of the British Empire. By visiting you are spreading that legacy, perhaps out through the skies. For now, I shall bid you a good day and welcome you to the Torchwood Archive. Do, please look around."

The Torchwood Archive is a forgotten asteroid in the centre of a great war. Jeremiah is its first visitor in many centuries. He's come to learn something very important. And the ghosts of Torchwood are waiting for him.