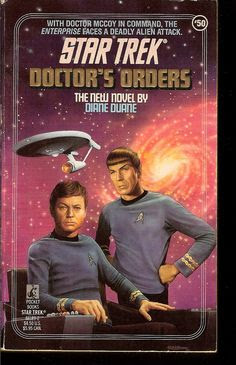 We join the crew of the Enterprise as they are conducting a survey of a recently discovered planet whose inhabitants are something that the human race have never encountered before. Captain Kirk has been ordered by Starfleet to enquire whether the inhabitants would like to join the Federation. The survey and investigations have left Doctor McCoy completely exhausted and in a clever attempt to get him to leave the sickbay and the labs for a few moments, Kirk orders McCoy to take command of the starship while he beams down to the planet.

But then things start to go wrong, Kirk disappears making contact with other species who live on the surface and McCoy is stuck in command and due to regulations, McCoy cannot be relieved of command until Kirk is found.
And McCoy quickly gets in over his head when a Klingon vessel begins to orbit the planet and when their party vanishes too, the Klingon captain is quick to blame the Enterprise and her crew. And then a worse threat arrives, an Orion dreadnaught arrives with the intention of raiding and pillaging the planet below. With McCoy's unorthodox attitude to command and his reliance on the crew, the Enterprise must negotiate these difficulties until Kirk returns safely.

It is fair to assume that McCoy doesn't have the best time in command!

Doctor's Orders is an interesting little story. McCoy is qualified to take command given his rank as a Commander but he isn't really suited to command on board the Enterprise. His continued command throughout the book is a little unrealistic and uneven as he isn't allowed to be relieved by any of the other senior crew members. This doesn't make a whole lot of sense and is really only used as a way to progress the story and keep McCoy as the central character. But these uneven bits of plot are tolerable as it gives us an interesting spin on McCoy's character, one who is side-lined a little bit in the range of novels.

It is safe to say that McCoy's way of command is a lot different to that of Captain Kirk. But all of his decisions and actions stay true to the McCoy from the original series. And it is really interesting to finally see McCoy completely out of his element and this book works perfectly as a little character exploration piece.

The novel range fell into a 'Planet of the Week' and this planet, Flyspeck as it is named by the Enterprise crew, is home to three separate species. The Ornae, the Lahit and the ;At all share the same planet and appear to live in peace with one another. But the ;At aren't all that they seem and it transpires that they are the Guardians that the other species all talk about. It is the ;At that are responsible for the disappearance of Kirk and the Klingon exploration party. It is interesting that the ;At seem to mirror McCoy in that they are both in charge of things and situations that neither want to be in charge of. What this book really tells us is that, while we sometimes believe the grass to be greener on the other side, sometimes it is where we are and where are expertise lie that are the most comfortable.

Doctor's Orders isn't as well respected as some of the other novels from Diane Duane it is a well written and well executed story from Duane. All the inhabitants on Flyspeck are really interesting and their planet and way of life is something that we haven't heard of before in any of the Star Trek television series or literature. Duane nails all the characters capturing each member of the Enterprise perfectly. And while this book might fall a little if one is looking for a really interesting read, it excels at being a character driven piece, which is what I believe it should be considered as.