Once Upon A Time: Season 3 Episode 8: Think Lovely Thoughts Review 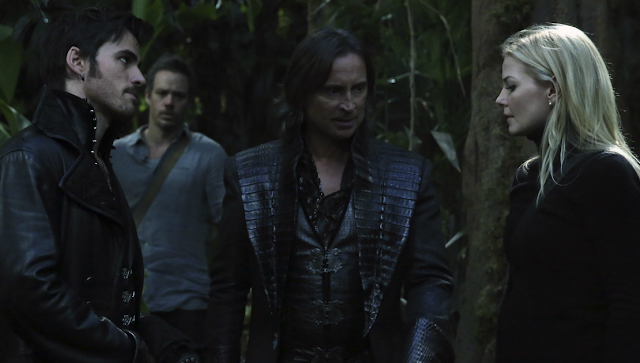 Think Lovely Thoughts delivers a lot surprises and they are really satisfying to watch! Finally, sticking on Neverland might have been worth it. At first though, the Rumpelstiltskin and his father story felt a little slow, though Rumple's lack of a role model explains why he is the way he is and his dire abilities at being a father himself. But it didn't seem like that little story was going to go anywhere until they went to Neverland. All the set up to explain that Peter Pan is actually Rumple's father worked, and it really surprised me!

Now we know what had transpired between the two of them, it finally makes sense about those conversations they have had in previous episodes and we know feel sorry for poor old Rumple. It is interesting to see characters develop, especially evil ones.

But the Peter Pan reveal wasn't the only twist we got. When we saw Pan and Rumple fight, it was obvious that Rumple wasn't going to win. I didn't guess that by not winning, it would mean Pan would send Rumple into Pandora's Box. And in those final moments, it seemed like Henry would listen to his parents and rescuers over what Pan was telling him. It was interesting to see him do something completely out of character and hand his heart over to Pan. This scene shows us how much of a threat Pan actually is and how much influence he can have over people.

Finally raising the stakes was the plot point that Neverland needed. We now know that the island sort of matches Storybrooke time and that the group have only been away for five days. But it has felt like so much longer than that because nothing happened. By stepping up the action and the threat hanging over Henry's head, the show got a new surge of adrenaline that made you want to watch.

Actor Stephen Lord did a good job as Rumpelstiltskin's father and managed wonderfully to emulate Robert Carlyle's voice. He didn't mimic it which was the right move but did just enough for us to notice the family connection. And he was the only good guest star as Marilyn Manson does a good job voicing Pan's Shadow. He completely nails the creepy tone it needed and it gets under your skin.

But those digital backgrounds continue to be a problem for me and it undercut the final scene that took place on Skull Island. They are so distracting, if they can spend money making the digital backgrounds, surely they can just make a set? In close up shots, it looks good but when they reach up too far with the camera, all sense of reality is shattered. It is a weak point in an otherwise brilliant episode.

This episode is engrossing, touching and action-packed with a real sense of time running out. The twists and turns were genuinely surprising. Henry's rescue party are the most interesting they have ever been and it was fun to watch them working together properly. Given the way this episode ended, I can't wait for the next one!