Once Upon A Time: Season 3 Episode 7: Dark Hollow Review 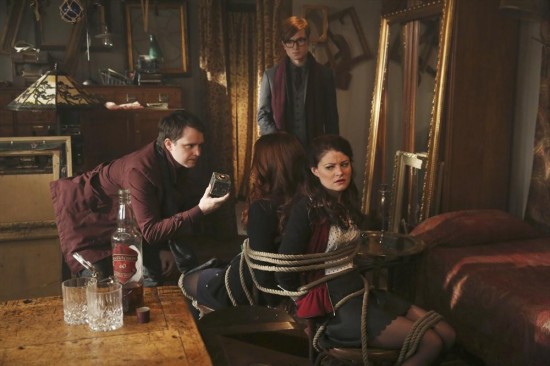 After six episodes, it's a joy to see Storybrooke again. And Joanna Garcia continues to delight in the role of Ariel and both she and Belle had some great scenes together. Ariel manages to hit the innocent note you would expect from someone who spent their life under water and her optimism, not to mention spunk is infectious! And Ariel pairs superbly well with Belle and both actors have a great chemistry together.

But speaking of Belle, where has her sudden obsession with needing to the hero of Storybrooke come from? She wants to aid Rumpelstiltskin and help him to return but this desire to prove herself is new and a little unexpected. Perhaps she is annoyed that she got left behind but it would have been nice if the writers had explained her dilemma a little more.

Another loop in the Peter Pan story was displayed in this episode with the appearance of the Darlings, though why John looks like a hipster I have no idea! OUAT handled the appearance of the Darlings in an unexpected way and because we were so caught up with Belle and what she was trying to do, that we didn't suspect their true motives or who they really were. I didn't even get it when we saw a teddy bear hanging from their car's back window!

Once again it was Hook who stole the scenes in Neverland. Colin O'Donoghue owns the reformed pirate and has masterfully brought him to life. And he's in love and its completely heart breaking. He isn't being a jerk about the fact that Neal is back and tells him honestly about his and Emma's kiss before apologising for it. But then it was ruined when they descended into a stupid, almost sitcom fight and they fell into predicable territory!

And talking of fights, the fight between Charming and Snow was really immature. Charming should never have lied to her for so long in the first place and yes, Snow does have the right to be angry. But surely she is too old to be giving him the cold shoulder and stomping about? With Henry's life on the line and her acting like this perhaps Charming was right to keep his poisoning from her. But their supposed to a couple that we are rooting for, if they go on acting like stroppy teenagers, I'm going to loose interest. Or perhaps, Neverland has the ability to make everyone regress to some sort of childhood...

Finally seeing Emma use her magic and to capture Pan's shadow was satisfying. She succeeded where two men failed and it was interesting because she learnt the skill from Regina of all people! Magic will have a way to affect her life I'm sure and judging from Neal's expression, he wasn't too happy about it.

The effects in Dark Hollow weren't bad either. The red lighting successfully got across the creepiness of the place and the shadows looked suitably menacing.

But it was the return to Storybrooke that saved this episode and it was great to see familiar surroundings and faces. And although the lines felt a little clunky, it was fun to watch Ariel and Belle together and the return of the Darlings was an unexpected surprise. But it just goes to show that you can't really take the characters out of Storybrooke, not for as long as they have been wandering around Neverland...