Doctor Who: Terror of the Autons Review 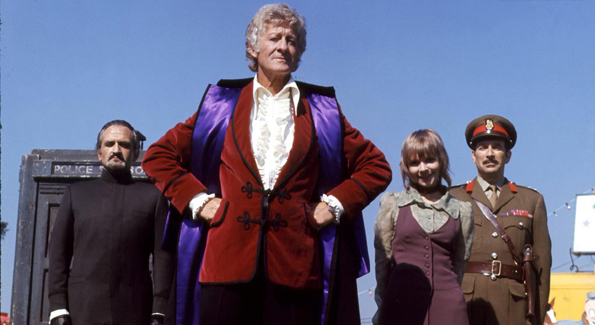 It is the basics for every story in existence, every hero has to have an nemesis who is equal and opposite. Not one of those one off baddies that turn up every-now-and-again but one who sticks around to cause our favourite heroes a great deal of trouble. One thing that has to be done though is that the relationship between the two has to be epic and when it is done well, be something that resonates throughout the rest of the series. Just like Sherlock has Moriarty, Batman has Joker, the Doctor has the Master... 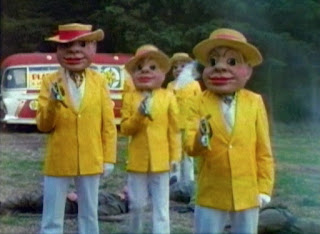 The title of this adventure feels like the producers were trying to trick us into thinking that it would be the Autons who would be the Doctor's greatest villain. They had already appeared in the first episode of the previous 1970 series and here they were again, using different methods to attack the planet Earth. There are also the things that the Autons stand for, fear, oppression and conformity that the Doctor disagrees with. Previously it had been the Daleks who had been the Doctor's greatest foes. But they had been done to death by 1967 when they were seemingly killed off at the end of The Evil of the Daleks, so the space for his greatest nemesis was open for new contenders.

All of this must have been apparent in the minds of the producers when they sat down to think up the character of the Master. They had already changed the premise of the show by stranding the Doctor on Earth, teaming him up with The Brigadier and UNIT, and Earth was where he helped stop impending invasions. So it was only natural that Barry Letts and Terrance Dicks came up with a baddie that was not only the equal of the Doctor but the complete opposite of him too. The result: the black-clad renegade Time Lord, the Master!

It is unfortunate then that, like the mighty Daleks, the Master would be quickly overused, as Letts and Dicks used him in every single story in 1971. However, he was an instant hit in Terror of the Autons thanks to the excellent performance from Roger Delgado and the brilliant script from Robert Holmes. 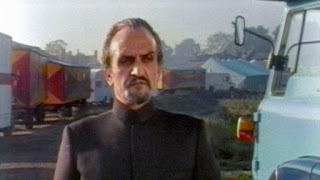 And the Master is exactly the same as the Doctor. In fact, the Master is the sort of character we would be looking at if the Doctor turned evil. Like the Doctor, the Master is a renegade but he is completely ruthless. The idea that the Doctor is the only decent Time Lord wasn't new to the series, we had met the Meddling Monk in, The Time Meddler and seen the War Lords in The War Games. But, once again, the Master is most like the Doctor than any of the other Time Lords we had seen up to that point. Both of them are genius's and practically magicians to anyone on Earth. Both them have a distinctive look which set them apart from the rest of the Human race and fundamentally, both of them are forces for chaos.

Chaos is certainly what the Master wants to unleash here with him laying the groundwork for a second invasion attempt from the Nestene Consciousness and the Autons. What is interesting is that the Master has no devotion to the Nestene cause, nor has he given any thought whatsoever to the consequences of his deal with the entity, considering how quickly he changes sides when things go south in the end. In fact, considering they are the monsters in the title, the Autons get very little to do except to moan about their invasion plans not moving as quickly as they would like.

This dynamic is also something that wasn't new by the time this story was broadcast. It feels a lot like the Cybermen in The Invasion who got very little screen time. Instead, a lot of the story was focused on their human 'ally', Tobias Vaughn. So, like the Cybermen, the Autons are relegated to be the sideshow, which is ironic given that the Master first appears in the middle of a circus. The circus setting is a clever move on Holmes' part as the Master was described as a conjurer. And in working with the Autons, the Master is allowed to create amazing tricks through plastic. This allows us to see his imagination and his evil sense of humour. 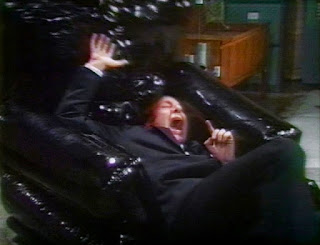 Terror also gives us a number of grisly deaths. Someone sits in a plastic chair which proceeds to fold around him and suffocate him, a horrid little troll doll which strangles people, deadly daffodils which spurt a thin sheet of plastic across people's mouths to stop them breathing, evil telephone wires which wrap themselves around people's necks and a mob of killer clowns. But perhaps the most distressing death to be included in the story doesn't come at the hands of the Autons but the Master who literally shrinks someone down and puts him inside his own lunchbox. The only time that we see the Master smile throughout the four episode adventure is when he is about to kill the Doctor at the end of episode three with a deadly telephone wire. He really is the Joker to the Doctor's Batman.

It was also a good choice to pair the Master with Jon Pertwee's incarnation of the Doctor, who can be pompous, disdainful and vain. And in Terror, the Doctor is nasty to everyone. He calls his new companion Jo Grant a ham fisted bun-vender. The Brigadier and UNIT are all idiots and the Master is an unimaginative plodder. And in episode three he lords it over a bureaucrat using his upper class rank as a weapon.

The ray of sunshine in this adventure comes from the Doctor's new companion Jo Grant, played wonderfully by Katy Manning. She would go on to become the quintessential Pertwee companion, one of the most memorable assistants from the seventies and one of the most popular companions of all time. It is unfortunate that nowadays she can be overlooked as something of a 'blonde bimbo' when she isn't. This only came about because Manning would go on to pose nude with a Dalek for a magazine spread. She isn't as smart as the Doctor, but Jo sure as hell isn't daft. The first thing she does is put out a fire started by one of the Doctor's experiments, proving that she is capable and cool under pressure.

Watching Terror, there is a definite feel that Jo was supposed to be something along the lines of Emma Peel from The Avengers. She works for UNIT and has experience with codebreaking, lock picking and dealing with explosives. I'm glad she didn't come across too much as Emma Peel as she wasn't something that the show needed. UNIT were there for the action while Jo performs a much more important role, she keeps the Doctor and the show, grounded.