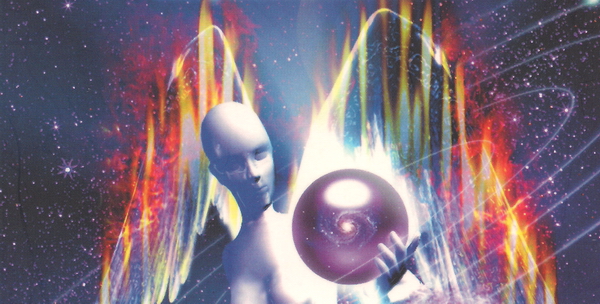 We begin this novel with the Master wrecking more havoc on the universe in another attempt to keep himself alive. But his attempts to keep himself alive result in the creation of a being who calls itself the Quantum Archangel. The Quantum Archangel is a being of almost god like powers with the ability to reshape the whole of creation to her designs.

The Quantum Archangel is perhaps the embodiment of fan-fiction. Author, Craig Hinton seems to feel completely at home writing like he does taking bits and pieces from across the history of the show and throwing them in a 282 paged book.

It is massively strange then that all the elements in this novel totally work! Unlike so many novels written by Gary Russell, Craig Hinton's novel is enormous in its ideas and the story encompasses this universe and a little bit beyond! And it tackles the idea of changing the entirety of the universe as if you were discussing a shopping list. If you read this novel, you will see that it tries to include everything it possibly can and rattles them off quickly, borrowed from the Doctor Who universe and he also sneakily borrows from the Marvel comic book universe with the mention of the Shi'ar Empire from the X-Men books and Pym Particles from Ant Man and the Avengers!

This novel is the closest thing you will get to a Colin Baker television adventure in print form. He is really bold, brash and loud within these pages, just like he was on the television. He is full of boyish charm and with the exception of some dodgy passages Hinton captures everything there is to admire about the Sixth incarnation of our favourite Time Lord. Colin Baker's Doctor wasn't well served on television and because of this, he is not considered a very good incarnation of the character. That is a mistake as I think he is great and everything there is to love about his take on the Doctor is on display in this novel. He is brilliant!

But, no matter how much he tried to act like a human being or how much he tried to look like us, the Doctor isn't human and that is pushed right to the fore in this novel, especially in the passages where it transpires that he accidently destroyed an entire race on the planet of Maradnias and wipes out billions because he miscalculates slightly. This leads to Mel believing that the Doctor wanting the universe to be full of evil to fulfil his ego and justify his moral crusade. This decision leads to Mel leaving him and all the Doctor wants is some peace and quiet. Of course, that doesn't happen. The differences between the sixth and fifth incarnations of the Doctor are also on display here. While the Fifth didn't enjoy drinking, the Sixth can't wait to consume some alcohol. And that was what made the Sixth Doctor so brilliant, he was a hero with the seeds of darkness within him, fighting to get to the surface. The TARDIS also gets a good turn here when she is attacked and the Doctor attempts to use a time-ram to stop the Master only for his own machine to turn around and attack him out of sheer of terror. It is the only example from anything in the classic era of the show which demonstrates the TARDIS as a living thing.

Mel is also given a good turn in this novel. Not portrayed as the scream queen she was on television, she decides to leave the Doctor after the events in the unseen adventure on Maradnias because she is terrified that she will go mad if she spends any more time in his company. She goes back to meet her tight circle of friends she had at university but when her friend, who is transformed into the Quantum Archangel changes history for her friends, Mel becomes the prime minister of Great Britain and we get some interesting passages there detailing her new life.

Much like the television adventure, The Time Monster, that this novel is connected to, the Master is inimical to the plot and helps to drive it forward. After having been double crossed by the Krotons, he seeks revenge but ends up on the wrong end of the Chronovores who are after him after what he had done to them before. What is also interesting is that he is now back to his sketle form he had in the Tom Baker years because of the power from the source he stole from Traken having run out. His whole plan is to achieve godhood, power and immortality so he can wipe out all the Chronovores. Hinton's description of his TARDIS is brilliant and something we haven't heard before. It is dark and shadowed with whispering corridors, a oily and filthy power room and a very satanic library. But despite everything he has done, the Doctor still tries to help him and cares about him. What was also nice was that we learn at the end of the book that he is headed to the planet of the cheetah people in search for a cure to his current ailment leading to the events of the television adventure, Survival.

This book is incredibly clever even if it does come across as one big piece of fanfiction. Hinton gets all the characters involved completely correct and the finished product is highly enjoyable. All the plot points lead to a final confrontation where the fate of all creation is literately and believably at stake...
And its brilliant!