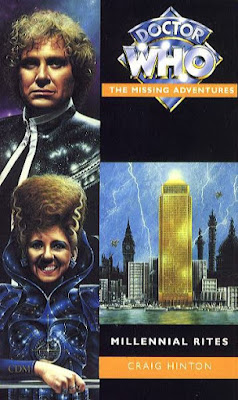 Craig Hinton, the author of this novel passed away in 2006. But Millennial Rites is the best book of his that I have had the pleasure to read. Hinton has sometimes been accused of basically writing Doctor Who fanfiction and calling it an original novel. But I disagree, why, when someone who can live as long as the Doctor, not spend his time thinking about previous adventures, monsters, events, friends and companions? Personally, I like my Doctor Who novels to tie into each other as it gives the show they have spawned from a more solid feeling. Millennial Rites is a very clever book with the first half taking place at the end of 1999 and the second half in an alternative universe that happened when the year 2000 came around. What I also like about this novel is it ties into the previous Yeti stories, The Abominable Snowmen and The Web of Fear and the spin off movie, Downtime. The villain of the story is The Great Intelligence and Hinton makes great use of the famous Jon Pertwee joke about there being nothing scarier than finding a yeti sitting on a loo in Tooting Beck by defeating the Great Intelligence from a loo in Tooting Beck. It shouldn't work but somehow, Hinton makes the whole thing make sense and enjoyable to read, bringing a smile to your face.

The Doctor has brought Mel to 1999 where Dame Anne Travers is receiving an award for creating the paramilitary organisation, UNIT, following on from the events in The Web of Fear. But all is not right in the world.
The baddie, Ashley Chapel from the novel, System Shock, has been researching the creature Yog-Sothoth-AKA- The Great Intelligence. From the outset, this novel looks like it is going to be a love letter to the Yeti adventures. But Hinton does something very clever and ties it into the novel, Head Games, giving us the origins of the Valeyard, the bad incarnation of the Doctor we see in The Trial of a Time Lord saga. The Valeyard comes into play during the half of the novel set in the alternative Earth with that being the Doctor's other life. As this section of the novel comes to an end, it starts to get very tense as we discover that the Doctor has to turn into the Valeyard to save the world but we have no idea if this will be a permanent change or not. In fact, Hinton's entire characterisation of the Sixth Doctor is really spot on as he knows he will regenerate at some point in the future and he wants to find a way to stop it from happening. His ageing also makes he feel sympathy towards the ageing Anne Travers. Quickly, the Doctor starts to become more and more manipulative as he tries to avoid becoming the future incarnation he saw in the trial room. Little does he know that these manipulations are what put him on that road...

I found it very good that Mel got two different personalities in this novel. For the first half of the novel, Hinton does a good job of portraying her as a woman out of her own time but she doesn't really get anything new to do except use the computer programming skills that inspired her character in the first place. In this second half of the novel she becomes the Technomancer. This Bride of Frankenstein version of her is interesting as she is so different to the Mel we know. She rules over her people with an iron fist and works with the villain, Ashley Chapel.

Anne Travers is defiantly the star of the novel and it is clear that after the events of The Web of Fear and Downtime, she has aged somewhat and has become particularly melancholy. What is interesting to find out is that neither she or her father have managed to forgive themselves for the Intelligence incursions. After her father's death in Downtime, Anne has delved into the myths of the Intelligence for a way to destroy it. When she finds an spell to send it away forever, she casts it at the same time as Chapel and it ends up bringing the Intelligence through once more changing the world. Her relationship with the Doctor through the novel is great as the pair continuously sympathise with each other which makes Mel feel envious of her. His characterisation of Travers is so perfect that it is heart wrenchingly sad when she sacrifices herself to stop the Intelligence and send the Earth back to the way it was.

Craig Hinton created a brilliant novel when he wrote Millennial Rites. My only problem was that it tied into so many novels, of which I had read none of but you don't need to have read those to understand what is going on here. He gets all the characters right and makes them relatable to the reader. I love the cover for the novel which shows the Doctor in the Valeyard costume and Mel in her Bride of Frankenstein getup! Hinton managed to create a book that was both a love letter to the adventures that proceeded it but made it something that was new and interesting. I would highly recommend picking this book up at the first opportunity!

But there is an air of sadness about this novel too, Hinton dedicates it to his dear friend who passed away just minutes after finishing the first draft, he tells us. Hinton must have had great difficulty in finishing this book. And wherever Hinton is, I hope he feels immensely proud of this book...