Doctor Who: The Chase Review 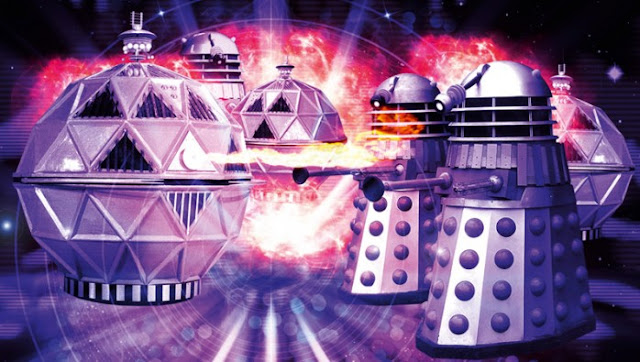 Nowadays, companions share the same billing as the Doctor. People like Jenna Louise Colman as Clara was as important as the title character. This had never been done in the classic series mainly because of the show's formula, the Doctor and his companions. And there is absolutely nothing wrong with that. But many Doctor Who fans, including myself, look upon Ian and Barbara differently. During their time, especially in the first series of the show, they are just as important as the Doctor and Susan, if not more so. And that was something that would never be repeated until the show came back in 2005. That is why both Ian and Barbara hold a special place in the hearts of Doctor Who fans everywhere. 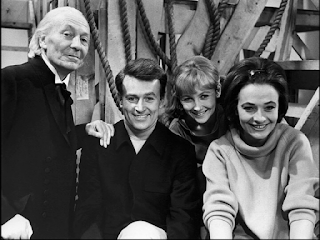 The story itself is one of the ones that gets a lot of criticism. While some people say it is a load of rubbish, some people worship this adventure while a people place the blame on the direction from Richard Martin.
I will admit, it was one of those stories that I had no idea which way I was going to go. I remember having a little bit of it on a tape when it was on UKTV Gold once upon a time and remember enjoying that piece. But I had never seen the whole story. I didn't know what I was going to make of it.

The basic premise is that the Daleks make themselves their own time machine and send a squad of Daleks to hunt down the Doctor, Ian, Barbara and Vicki and exterminate them so that no one will stand in the way of their universal conquest. Finding out about the Daleks' plan, the Doctor and the gang must try to stay one step ahead of the Daleks at all times and try to find somewhere out of the way where no one will get hurt and finally fight them. After traveling to the top floor of the Empire State Building, on board the Marie Celeste and inside a haunted house, the TARDIS finally lands on the planet Mechanus. But in the end, they don't end up having to fight as the Daleks clash with the inhabitants of the planet, the Mechanoids and are all destroyed. While this story sees the departure of the last remaining original companions, we do meet the Doctor's next male companion to accompany him and Vicki in the form of Steven Taylor, a capable astronaut from the future played by Peter Purves.

Some fans claim that the Daleks that we see in this story are the worst example of their race in the show's history. And yes, I suppose I would slightly agree with them are there are some stupid things that these Daleks do. The desperately try to get one of the sailors to stop on the Marie Celeste and instead end up chasing off the side of the ship. One Dalek even falls into the water! And there is their ridiculous conversation with a tourist on the top floor of the Empire State Building. The way they get spooked in the haunted house is incredibly silly and we get an example of some bumbling Daleks who can't get their lines out right. But fault could also lay with the way the Doctor and his companions in their reaction to them here when in their previous adventures and future ones with the Daleks they react in desperation. Here they act almost as if they are putting on a play, saying they are afraid of the metal meanies but not really meaning it. 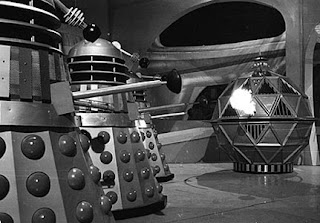 But I also think that this dislike for the Daleks in this story is a little unjustified. They are still entertaining to watch in what was an entertainment show and they still have a real element of menace about them especially in their treatment of alien races such as the Aridians and the Mechanoids. It is also important to remember that the Daleks at this time weren't supposed to be the most powerful creatures in the galaxy. Sure, in their next story, The Dalek's Master Plan and their two appearances with Troughton stated that they were. But in story times they had evolved enough to become that powerful. Here they are still getting used to traveling to other worlds and conquering them. So yes, they can still make mistakes.

And lets all remember that in the end, the Daleks always lose. The only instance where this isn't true is the story, Dalek and that is only because the Dalek chooses to kill itself at the end due to being the last of it's kind. Whenever they turn up we get the same old guff about them being the most powerful beings in the universe. But then the Doctor defeats them.

So why do we have so many stories with the Daleks, when we all know that, in the end, the Doctor will defeat them? Simple, Daleks mean more viewers.

Another point that fans seem to take delight attacking this story with is the direction from Richard Martin. And while it isn't the best piece of direction I have ever seen, it is no where near as bad as people to try to make it out to be. The problem with the direction comes from episodes 4-5, especially in those scenes in the haunted house. At one point, the Doctor and Ian go down to the Dr. Frankenstein's lab and in the background we can clearly see a Dalek, even though the Daleks were still to make their appearance at that location. The way he switches between William Hartnell as the Doctor and Edmund Warwick as the Doctor's duplicate gets both confusing and unnecessary. For me though, the only major direction problem with this story is the end of episode 1 which is a blatant copy of the cliff-hanger at the end of the Invasion of Earth story, which sees a Dalek rising from the Thames. Here we get a Dalek rising from the sandy surface of an alien world but it isn't in the least bit surprising as we already know that the Daleks are there! 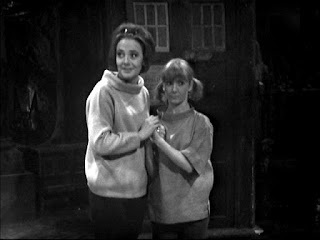 But story is what saves it for me. I love how the action moves from place to place and from time to time. In no way could you set a story on the top floor of the Empire State Building, one reason why the Tenth Doctor/Martha story didn't work or on the Marie Celeste though that would have made an interesting historical adventure. And you couldn't base an entire story in the middle of a haunted house. The story is just right!

But going back to the haunted house parts, for me those are easily the best moments in this story, they are both funny and the mad old ghost lady was quite surprising to me, mainly because I wasn't expecting her to turn up! It must have terrified the children watching at the time! The very idea that everyone, including the Daleks is terrified of what is going on his highly comical. One of my favourite moments in when Frankenstein's monster wakes up and it isn't Ian who is terrified by the Doctor, who rushes off making some comment about finding out where Vicki and Barbara are. We then discover that everything in the haunted house came from the minds of the TARDIS crew.

This perhaps explains why the Daleks can't exterminate Dracula, Frankenstein's Monster and the ghostly lady because they weren't really there. Or perhaps they were and the fact that they are all already dead means they can't be killed again. 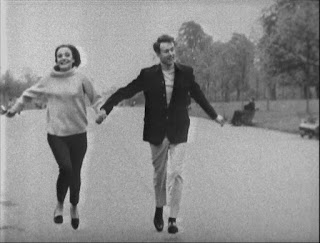 I think that coming away from this story I would agree with the majority who claim this story to be a bit silly and daft. But you have to look at it as that is its charm. The notion of silly Daleks because they are vulnerable is a little bit daft too because somehow, it makes them more relatable. In fact, these are probably the most relatable bunch of Daleks we've ever met. The story works and moves along at an enjoyable enough pace. All the set pieces are good from the audience front if not great from the direction front. But if you go into this story looking to be entertained then you'll enjoy it!

And Ian and Barbara's exit is very well handled. We don't hear a lot from them after they leave here except for a fleeting mention in The Sarah Jane Adventures where Sarah says "There a couple of school teachers, Ian and Barbara, who, people say, haven't aged a day since 1965." Perhaps there was something on board the Dalek time-ship that they use to return to Earth, or their ability to not age and remain youthful throughout the rest of their lives was one final gift from the Doctor...