Comedy Classics! Are You Being Served - Series 1 Episode 1 - Pilot Review 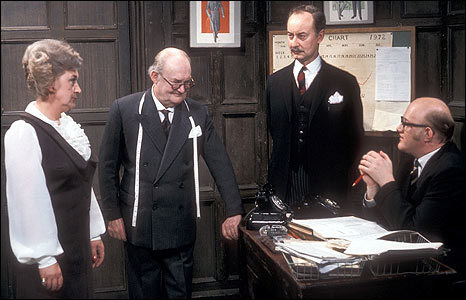 This is the series opener. The one that started the glorious ten seasons that we can now enjoy on DVD and occasional repeats on the television. It is bizarre then that it doesn't do very much.

We begin the episode learning that the Menswear Department consisting of Old Hat, Mr. Grainger, camp as Christmas Mr. Humphries and the womanizing Mr. Lucas, have to share their floor at the Grace Brothers Department store with the Women's Department made up of the feisty Mrs. Slocombe and the glamorous Miss Brahms. While the departments can tolerate each other they don't really get along despite the younger members of the department get on better than the older ones. Their issues are mediated-to an extent- by the snobby Captain Peacock. Captain Peacock has to answer to the head of the department, Mr. Rumbold, a character we meet only 5 minutes before the end.

The pilot episode performs the function of setting up the rest of the series but it doesn't really do a very good job. What is disappointing is that none of the main characters get a very good introduction. Instead we meet the characters as if we have known them all along. The only character to get a decent introduction is the decrepit Young Mr. Grace - owner of the department store. This could be because we are used to modern ways of doing television where each character gets their own introduction, it wouldn't have been so bad had all the characters had some proper storyline to get involved in.

But this is only a series opener and a piece of television that comes from 1972 so it can't really do much except for giving the series a good time to shine. Which it does and it is full of the usual Are You Being Served hilarity.

Though some of it isn't necessarily politically correct by today's standards, it is full of humorous moments including some departmental bickering, plenty of innuendos and catchphrases. Some stand out lines include Mrs. Brahms - "...Mrs. Slocombe didn't want to take down your trousers without asking you first." And the catchphrases include, "Are you free?" and "Don't worry sir, they'll ride up with wear!"

While the set up is a bit naff and the story is extremely basic it doesn't work too well as an introduction to the popular series. But there are a number of good points about it too.

While the show got a little repetitive towards the end, here the episodes felt fresh and strong mainly due to the show's creators having worked themselves in a department store so they had plenty of anecdotes to share.

And the characters are brilliant! With the upcoming remake of the series later this year, I am a little concerned that it won't be as good as the original after all, how can anyone top what these guys have done?
Miss. Brahms was never well served during the entirety of the show but bless Wendy Richards for sticking it out and making the best of what she was given. She is one of the stand out characters because of Richard's excellent performance. Mr. Lucas is the other youthful character, despite the actor looked like he was in his mid-thirties. But through the charm of Trever Bannister, Mr. Lucas comes across well and his attempts to flirt with Miss. Brahms are hilarious to watch throughout the series, especially when they go wrong.

Creators, Jeremy Lloyd and David Croft created some brilliant comedies and Are You Being Served is no exception!