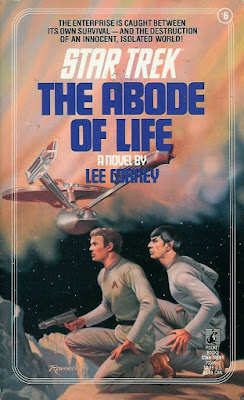 The Abode of Life is one of the original Star Trek books from the 1980s. Unlike some, this one isn't very good and unlike some which take you a little while to read, this one you can easily get through in a weekend sitting.

The premise of the novel is that the Enterprise, once again in trouble having been in an accident with a strange warp beam thing ends up orbiting a unknown and unexplored planet called Mercan. They need to make repairs to the ship but don't have all the resources they need to complete the work. Kirk, McCoy, Scotty and Yeoman Janice Rand beam down to the planet but arrive in the middle of a dispute between all the factions who currently live on the planet.

And then to make matters worse, the Mercans are incapable of believing they aren't the only life forms in the galaxy who exist. And the appearance of the Enterprise gets them all in a tizzy. There is only one faction, the Technics who are open to the possibility of there being other life out there in the universe but that group is the one who finds themselves under attack from the Guardians and the Proctors, who are high priests of the local religions.

Mercan also has some issues from an unstable nearby star that upsets the balance of things on the planet every few years. It is then up to the Proctors and the Guardians to decide who will live underground and be safe and who will die on the uninhabitable surface.

And of course Kirk and the gang get stuck in the middle of a potential civil war. Not only does Kirk have to arrange the repairs to the enterprise and solve the problems with the star, he has to get all the factions to make peace with one another without violating the prime directive.

It is not a bad book by any means but it is not essential reading. It is one that you can easily skip over due to the silliness of the three factions and their conflict is rather boring. There is no expansion to any of the Enterprise characters and the rest of the inhabitants on the planet are hardly worth mentioning because they are dull, shallow and narrow minded. It isn't great Star Trek literature but its worth reading on a rainy afternoon.