Once Upon A Time: Season 3: Episode 2: Lost Girl Review 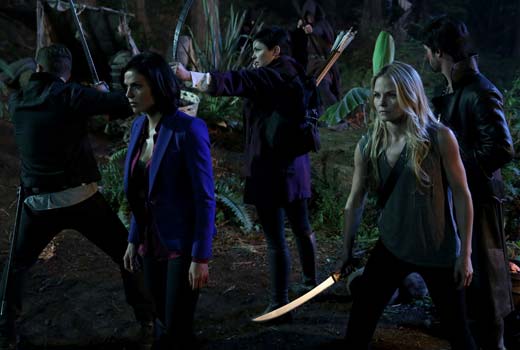 The second episode of the third season demands much from our characters, they have to accept and embrace who they really are. Rumpelstiltskin is a coward, Peter Pan a demon, Snow White is a ruler and Charming comes across as a lovable numbskull.

Still trapped the hellish Neverland, our famous five's leader, Emma is approached by Peter Pan, played wonderfully by Robbie Kay, and offered a map which Pan says will lead the team to Henry. The map is a blank piece of parchment and Pan say's its true nature will be revealed once Emma really excepts who she is.

To help along on this journey is Mary Margaret AKA Snow White. She chooses this time of all times to say that Emma can start to call her mum, seriously doesn't know anything about timing! She is also trying to coax Emma's feelings out of her so she can unlock the map. Eventually, Emma thinks that her denying her 'saviour' status is what will make the map work but when she admits who she is, it still doesn't work. But when she admits that she feels more like one of the Lost Boys than she does a saviour, the map unlocks itself but devastates Mary Margaret.

The flashback sequences take us back to a time where Snow White and Prince Charming has just woken Snow up with a kiss and their becoming King and Queen. Charming wants Snow to embrace who she is so that she can defeat Regina. But this only results in Snow coming across as someone who is really thick because he manages to trick her into thinking that taking a fake Excalibur from a stone will make her the rightful ruler of the kingdom. Alright, his ruse worked and Snow managed to halt Regina for a while by slicing her across her cheek, you can't help but wonder if she really believed that what had happened with the sword in the stone was real. Surely she wouldn't have been silly enough to believe that? But apparently she is and Snow gets very angry when she confronts Rumpelstiltskin about what happened.

But this whole episode feels slightly pointless as it looses the momentum of the previous one and doesn't have much of a plot or a driving force. There is just a lot of walking around a jungle. The only insight we get here is from Emma when we discover that she still resents her parents from sending her to our realm where she spent her entire childhood bouncing around the foster-care system. Rumpelstiltskin, working alone, begins to have visions of Belle who confronts him about what he is going to do when he finds Henry. Rumple says he is worried that even though he is going to save the boy, his survival instincts are going to kick in so that Henry will die meaning Rumple will live. Belle wants him to let go of what he may have done in the past. Rumple is also still haunted by the doll which he sets fire too but when it comes back he keeps it. Surely Robert Carlyle, one of the greatest actors on this show deserves more screen time than he gets here and better use of his screen time, not just moaning about some old doll?