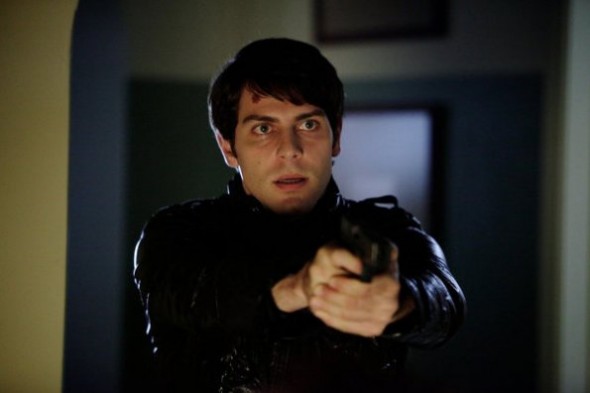 The story of the three little pigs has been done. And by done, I mean time and time again. In fact, it's been overdone. So when taking on such a well known tale, you have to be very inventive in order to keep it interesting. And Grimm really stepped up to the plate in that respect. It takes the story and twists it so that the baddies are the little pigs. Here we learn that wolves can be victims too...

Revenge can motivate anyone. A female Blutbad killed two Bauerschwein, (pig), brothers and the last brother goes after her family. The problem is that the Blutbad happens to be Monroe's ex girlfriend, Angelina. Monroe used to run with a different crowd. The writers also cleverly help the plot to thicken when the Bauerschwein turns out to be a police arson investigator who can make the deaths of the two Blutbad look like bad accidents.

We finally get some character conflict in this episode too! Monroe is forced to face his life in the past and Nick has to deal with the dirty cop and how that will effect his role as a Grimm. Monroe obviously wants to help his wolf friends but he doesn't want to be dragged back into his old life. But it doesn't stop him from taking a little trip on the wild side as he and his ex go for a little romp in the forest. It all ends in blood of course as her last brother is killed by the Bauerschwein.

Of course, it doesn't take long for Angelina to work out it is the arson cop and their battle ends in a vicious little showdown. Nick turns up and manages to stop the fight for a while be removing Angelina from the equation for a time. It is safe that to say that we may not have heard the last from her as Nick disrupted her vengeance. But poor old Nick still doesn't have a complete grasp on his role as a Grimm as he kills neither the Bauerschwein or the Blutbad despite them both being bad enough to warrant being permanently put down. He is still too nice, something which some Wesen will probably try to take advantage of since they believe he is a pushover.

Monroe finally gets some serious screen time and has a larger role here than just being Nick's encyclopaedia. He is one of my favourite parts of this show and he finally gets some serious character development. And actor, Silas Weir Mitchell really delivers the goods too. You can Monroe struggling to juggle his past and present as they collide in a nasty way. He knows the life he is leading isn't that exciting and the return of Angelina brings those feelings to the surface.

Hopefully Grimm brings more episodes like this in the future as everything about this episode felt perfect and the conflicts legitimate. I really felt a connection with the characters of Nick and Monroe, something we haven't had before. I hope we get more like this!