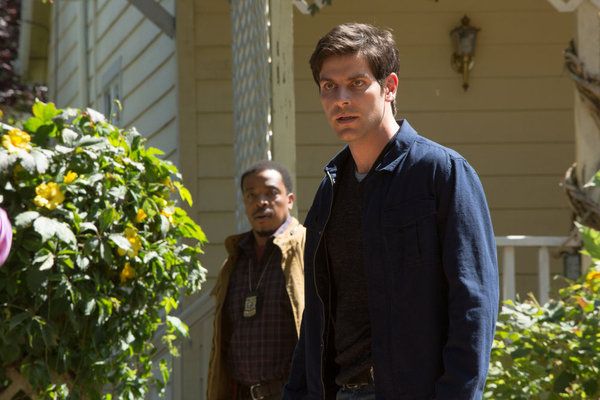 "There she paused for a while thinking... but the temptation was so great that she could not conquer it."

If the bees in the previous episode weren't wacky enough, then the Satyr-like creature in this episode takes the biscuit. And yes, wacky is good, Grimm certainly needs to embrace the bizarre elements after all, that is the point of the show. But what it needs to do is give the weird bits something weird to do. When the supernatural creatures commit a standard crime, they instantly become less interesting and the story strays more into a generic crime show, something there is no shortage of these days.

The creature here is basically a date rapist. I'm not saying that isn't a serious subject but it just doesn't fit into this world that Grimm has created. The goat creature featured here is called the Ziegevolk and can attract women by releasing pheromones. It eats endangered species of toads before he attracts the ladies with a new found charm and the toads seem to magnify his influence. He then proceeds to trap those women in cells and impregnate them. But at the beginning, one escapes and he kills her which lands him on Nick and Hank's radar.

After some run of the mill police investigation in which social media plays a big part, they eventually find the lair of the Ziegevolk which is in the form of a bed and breakfast which specialises in couples on their honeymoon. This scene was quite funny where the baddie thinks that Hank and Nick are a couple and then Hank treads on one of the rare toads and kills it by accident. Nick manages to catch a glimpse of the Ziegevolk's real face but manages to keep the Grimm part hidden from Hank. But is keeping that secret that is putting a strain on his relationships with Hank and Juliette. I think this is something the show needs to continue to develop on screen so we can see him wrestling with his secrets. But anyway, Nick and Hank save the women and stop the Ziegevolk. But the investigation was so boring because the case was so boring to begin with.

What this episode fails to explain is why he killed the hallucinating woman at the beginning. If she was hallucinating she wouldn't remember him and by killing her, he put himself right on Nick's radar.

As usual, Monroe's appearance brightens up the episode and he once again fills his role as the resident Grimmopedia. This episode also gives a little sub plot to the character of Captain Reynard who has a run in with of the Reapers who are after Nick. Reynard chops the Reaper's ear of but the scene feels a lot like an afterthought, but it was interesting to learn that the Reapers have some of a hierocracy.

This series will have to be careful when balancing the campier factors with the darker subjects or it will become something really silly.
The bee episode was far too campy and this episode borrows from the horror genre in an attempt to be a complete contrast to the previous one. But the plot was just so dull. We know that Grimm can do better than this, some I'm willing to let this go as a momentary lapse in judgement.