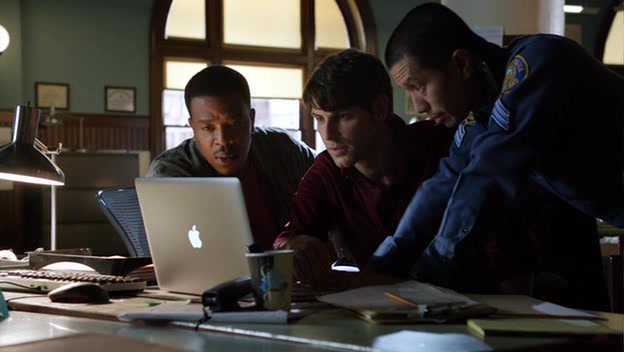 "She'll sting you one day. Oh ever so gently, so you hardly feel it. 'Til you fall dead."

Essentially, what we learn from this episode is that flash mobs and bees are a happy combination...

Bees have swarmed to Portland and they appear to be stinging and taking names. And, since this is a show were nothing is normal, you know that these ain't your normal bee. So, not only does Nick have to deal with normal police problems but Grimm ones too and they both appear a little to close for comfort.

For the third episode, we get a new foe and it appears that we will be learning about this strange world in bits. That's fine, but it is a little too slow though. We have a race of bee people or organise flash mobs! But what was nice about this episode was they way they went out it, organising flash mobs and tweeting about fairy tales was a nice way to mix old and new. With what begins as a normal police investigation, Nick quickly learns is anything but when the victim appears to have died from a massive overdose of Bee venom. What was nice to find though was that the police-esc elements are becoming more well rounded as it begins to find its rhythm with the supernatural elements of the show.

Nick learns from Monroe that these bee people are the supernatural communicators of the mythical world. Nothing happens without them knowing about it. What did seem a little odd was when Nick rang Monroe and simply said, "Hey, it's me." Surely it's a little too early for the characters to be that familiar with each other? Of course, it could be a sign that Nick wants to be friends with Monroe so, I'll let that slide! But it would seem that Monroe isn't at that point yet and it will be interesting to see how that relationship develops.

Eventually Nick learns the identity of the Queen Bee, played by Nana Vistor, Major Kira in Star Trek: Deep Space Nine. He also learns about her quest to take down all Hexenbiests. When he and Hank are assigned to protect one of them, Nick is shocked to learn it is none other than Adalind Shade, the woman who had tried to kill Marie a couple of episodes ago. While Nick pretends to not know her, we can instantly see right through his façade as he is obviously such an honest person that lying doesn't come naturally to him. This is first time we really see him wrestle his job as a cop and his heritage of being a Grimm. This difficult task is made even harder when the Queen Bee says all she has done has been to protect Nick.

His inner cop wins out in this struggle and he shots the Queen Bee when she tries to kill Adalind by injecting her with a lethal does of bee venom. As she dies, she gives Nick a warning that someone is close and that they are coming for him and we can him question whether he did the right thing. This is the first time we see the question of are all the creatures bad pop up in his head, that was certainly the impression Marie gave him but Monroe is one of the good guys. No doubt, we will see the repercussions of this decision evolve over the course of the season.

This episode also has a slight level of cheesiness, which is fun. One of the bees pulls out a phone which is yellow and black and the Queen Bee wears yellow eye shadow. This shows that the producers aren't afraid to have a little fun and makes the show stand out from others of it's kind which stay too serious. But, I wish they would deal with the heavier subjects a bit better. Nick lost his beloved Aunt in the previous episode but he is going about as if it never happened. Surely he couldn't have gotten over it that quickly?

Sadly this episode isn't the best that Grimm has to offer and feels like a bit of a dud, no matter how much fun the writers had trying to make it quite cheesy. I was entertained but not enthralled...