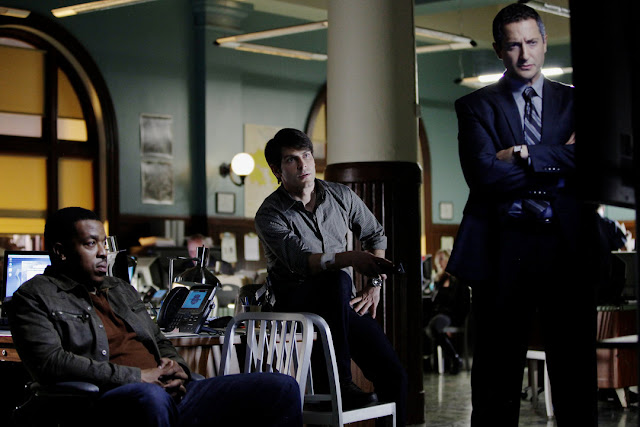 "She looked in the window and then peeped through the keyhole; seeing no one in the house, she lifted the latch."

From new fairy tale characters, death, kidnapping and dismemberment, Bears will be Bears, the second episode in the first season of Grimm has it all. This extremely fast paced escapade also has a more procedural/detective feel.

A young woman called Gilda with golden locks and her boyfriend Rocky like to break into the houses of the rich and snoop around, tasting wine, fooling around and testing the beds. But one night, they choose the wrong house and end up in the path of some dangerous bears who hunt their prey as part of a ritual rite of passage. That'll teach them to go snooping where they don't belong!

The owners of the house quickly report a break in and are shocked when they discover that the boy, Rocky, is missing. Or are they? When Nick and Hank go to visit the house, Nick notices strange claw marks on the walls and when they both come across the parents son's, one of them lets his guard slip and Nick see's his true face...

When Nick draws a picture of what he saw for his dying Aunt Marie, he learns the man he saw belongs to an race of bear creatures. All at the age of eighteen, he also learns that will soon be put through a rite of passage, from boy to man. Of course, the rite means that humans will be on the menu! Nick ends up involving Hank but manages to steer him around the fairy tale aspects of their investigations and while he is playing it smart, I'm not too sure how much longer he can keep both the worlds he discovered he lives in, separate. Finally managing to get the boy's father to help, Nick manages to put an end to the hunt just in time and saves Gilda and Rocky.

Monroe makes a second appearance here and it quickly becomes obvious that he will be the source from which Nick will learn about the Grimm and Wesen worlds. At one point Monroe even calls himself, Nick's Grimmopedia. It also seems that an unlikely friendship is beginning to form between the pair of them. Nick then asks Monroe for a favour in the form of looking after Marie. This is when it becomes apparent that Nick will be a Grimm that the world has never seen before, while Marie clearly shoots, stabs and decapitates first and then asks questions, Nick asks the questions first, letting Wesen live if they are good and only killing or imprisoning the bad ones if he needs to. While at the hospital, Monroe gets into a little scrap with a Reaper sent to kill the Grimm Marie where he accidently almost mortally wounds the Reaper. I'm glad that Monroe is one of the main characters as actor, Silas Weir Michelle brightens any scene he is in.

The only slightly niggle I have with this episode is that we don't really learn more about what a Grimm is. We are learning along with Nick, an aspect that I like but it was a shame that Marie didn't tell him more before one of the Reapers eventually gets her and she dies in Nick's arms. She does manage to tell him that there are people out there dedicated to wiping out all Grimm's and how her trailer will help him to discover who he is and how dangerous it would be if the evil Wesen got their hands on it. Given that the Reapers followed her car which was pulling the trailer, it is a little hard to believe that hadn't already seen it. Either that, or they are just a little stupid, either way, no doubt it will benefit the show that they didn't find it.

With these early episode, there is an indication that the show will give us a different take on different fairy tales with every episode. And the police drama feel the show has makes it easier to believe that it is more like paranormal occurrences than fairy tales. What I'm pleased the writers don't do is slap you in the face with fairy tale hints, instead they embed little moments and imagery we are familiar with that help us to see what story they are trying to interpret. Just two episodes into the first season and I'm addicted!