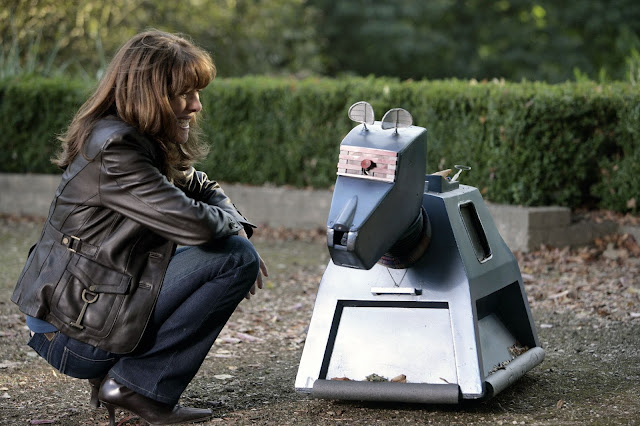 School Reunion is a special episode for the modern Doctor Who series. Sarah Jane Smith, who first appeared with Jon Pertwee and then Tom Baker, got the chance to return alongside the Tenth Doctor!

With this episode, the writers are sticking to the horror motif that has been running through the previous adventures, this time featuring a group of shape-shifting alien bat creatures who have taken over a school. As well as Elisabeth Sladen, also guest starring is Buffy star, Anthony Head as the head teacher, Mr. Finch. The alien Finch wants to control the imaginations of children so he can crack a code that fills the role of the blocks of the universe. If he ever gained control of those building blocks he would rise to godhood. And as per usual, it's all up to the Doctor, Rose, Mickey and now Sarah Jane to stop him. The whole thing feels like something out of an episode of Buffy!

It was strange though how, at first, Sarah was upset to see the Doctor again. We do learn that she was distraught that he never came back for her but, when she left at the end of The Hand of Fear, it wasn't the last time she saw him. In fact, she met Doctor's 1,2,3 and 5 in The Five Doctors. I wonder why the writer made her forget all about that? But the Doctor's explanation is that he couldn't bear to see her grow old, while he just kept on regenerating. So, I suppose we can forgive him!

David Tennant shows such a great range of emotions when he first meets Sarah Jane and their interaction for the remaining duration of the episode feels completely natural and believable.

We also get some nice moments between Rose and Sarah Jane. Both are initially jealous of each other but as time goes on, they begin to bond. Rose even suggests that Sarah travel with them again. Sarah declines this offer but it is a really touching moment. As a nice little addition we also get the reappearance of K-9 thrown in. K-9 and Sarah Jane were last seen together in K-9 and Company and then The Five Doctors so it was nice to know that the writers hadn't forget that she had him.

K-9 gets some nice moments with Mickey but Mickey quickly realises that he is the tin dog. He decides that he doesn't want to be the tin dog and joins the Doctor and Rose. This episode also packs a rather emotional punch as the original K-9 sacrifices himself to stop the Krillitane threat by blowing up their oil they use to make the children cleverer. It was nice though that that wasn't it for the robotic dog as the Doctor makes a completely new one for Sarah Jane much like he did for himself when the first K-9 left with Leela at the end of The Invasion of Time.

If you can look past the slightly Scooby Doo storyline, this episode is perfect for those who feel nostalgia towards the seventies era of the show. There is enough energy here to make it one of the must see episodes of the entire show and he reappearance of Sarah Jane and K-9 make this episode worth watching all on their own. But when watching this episode nowadays there is an element of sadness as we all remember that actress Elisabeth Sladen is no longer alive. But this works as a perfect tribute to her. There are no two ways about it, Elisabeth Sladen was a star in the Doctor Who universe.