Doctor Who: The Christmas Invasion Review 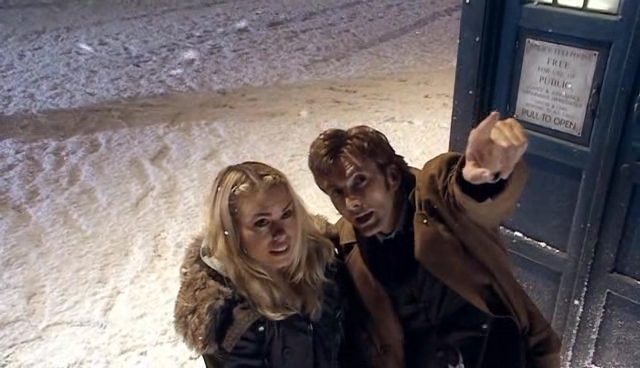 The Christmas Invasion introduces us to a new incarnation of the Doctor in the form of actor David Tennant. And it is an exciting story about an attempted alien invasion of Earth on Christmas Day!

David Tennant's take on the Time Lord is a lot different to that of his predecessor, Christopher Eccleston. It is true that Eccleston did a fantastic job of re-inventing the character of the Doctor and his presence is oddly missed, especially in those early scenes where the Tennant Doctor is unconscious. But Tennant's Doctor is slightly more eccentric and a lot funnier. And Tennant's performance is spot on.

The episode begins with Rose arriving home on Christmas Eve with the newly regenerated Doctor who falls into a coma after leaving the safety of the TARDIS and meeting Jackie and Mickey. Much of the first half of this adventure focuses on Rose as she tries to make sense of what has happened while explaining how he changed to her family. Not only that, she has to face the terrifying prospect of adjusting to life on Earth again.

But the Doctor is expelling yellow energy from his mouth which is attracting some nasty alien predators from far afield. When doing a little Christmas shopping, Rose and Mickey some rather aggressive Santa's. These Santa's are robots who have come equipped with some flame throwing musical instruments. They manage to escape and return to Jackie's flat only to find she has been given a new Christmas tree. When it starts to spin and destroy everything in its path, it seems all hope is lost until the Doctor suddenly wakes up and helps when Rose tells him she is in trouble.

The second half of the episode features the arrival of the new aliens called The Sycorax. They want to sell the human race into slavery but their plans get scuppered when they are defeated by the Doctor. There is comedy to be had at the same time which plays nicely to Tennant's strengths and he has a lot of screen presence whenever he is on. He really helps to elevate the story above what could have been a real campy episode.

There is also an interesting confrontation between the Doctor and the Prime Minister Harriet Jones. She orders the destruction of the retreating Sycorax ship after she thanks the Doctor for his help. Offended by her actions, the Doctor tells her he could ruin her career with one word. He turns to her aide and asks him, "don't you think she looks tired?" At the end of the episode we learn that Harriet is contemplating retirement and the Doctor and Rose depart for a new series of adventures.

The sole purpose of this episode is to serve as an introduction to David Tennant and it is a job it does wonderfully. Tennant is very different from his predecessor but it immensely entertaining and turned out to be one of the best incarnations of the Doctor!