Doctor Who: And The Crusaders Target Novel Review 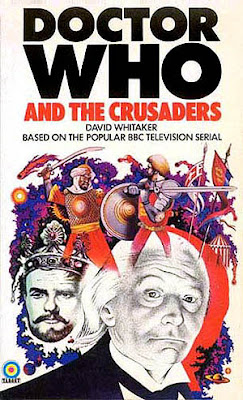 As you may know, there were three Doctor Who novelizations in the 1960s, David Whitaker wrote two, The Daleks and The Crusaders and Bill Strutton wrote The Zarbi. Here Whitaker revises his script for the original television serial The Crusaders for a book format.

But is it any good?

The answer is yes. Its a superb novel that in my opinion is one of the best novels that the series ever produced.

While its not as good as Whitaker's retelling of The Daleks, in which he virtually got to rewrite it and make it serve as the story where Ian and Barbara first came across the Doctor reworking the opening story, An Unearthly Child. But this is one of the books that a Doctor Who fan has to get, its wonderfully written full of rich characters and is exciting and even funny when it needs to be. It is a great way to whittle away a rainy day, or if you read as quick as I do, an afternoon.

The history featured in this novel is fairly well known. Set during the crusades, the European Christians got into their heads that it would be a good idea to go off to Palestine and kill a lot of people and claim Jerusalem in the name of Christendom. Jerusalem, like it is now, was a haven for Jews and Muslims. Both the Jews and the Muslims were much nicer than the thuggish Christians were during this dark time. The Christians had decided to undertake this holy war because of the nastier bits of The New Testament and the agreements from some horrid popes that were around at the time. They had totally ignored the bits of the New Testament that told people to be nice to each other and butchered anyone they came into contact with. This is explained a little in this novel though it rightly stays away from getting too involved in the historical events unfolding around the main characters. The goodies are clearly the sympathetic Saladin, his brother Saphadin and the heroic Haroun ed Dinn who helps Barbara escape from the ruthless El Akir. Whitaker is perhaps a little too nice to King Richard I than he should be, portraying him as someone his a little misguided but ultimately a decent chap. This is perhaps my one fault with this novel, as he wasn't like that at all. Also, there is a delightful scene where Ian and Saladin discuss why people from different religions go to war with each other over their gods, its a passage that still resonates today and if those two could work it out, why can't we?

But what really surprised me about this book is that it is the themes inside that still resonate today, even more so than they would have done in the sixties. The fact that the things that are happening today is a lot like the Crusades that occurred thousands of years ago are showing us just how far the human race has to change. Seriously, why can't people just be nice to each other rather than killing one another? In today's world, the Muslims or still not treated like human beings and their culture is treated with disrespect. It's shocking that people still hold onto the prejudiced views that those Crusaders had all those centuries ago, when will people realise that everyone is the same, no matter what creed, colour or size you are. But in a world that judges you just by what clothes you choose to wear, I wonder why someone like The Doctor would want to come to earth, even if he is fictional. These days, what sets the human race apart from species like Daleks?

But this is getting deep, as Barry Letts, one of the show's previous producers said, you aren't supposed to look to into the undertones of Doctor Who. But I think that with a book like this, it's hard not too.

It is a cracking read with the characters very well rounded and nothing like the cardboard cut-outs they were in the previous novels written in the 1960s. Whitaker has been given the room to heavily expand his story featuring more horses, soldiers and places than could ever had fitted into those tidy little studios in Elm Grove! The Shakespearian way of speaking he gave the historical characters in the television story has mercifully been toned down. This could be considered a slight anachronism as everyone in Britain would have been speaking French at the time. El Akir is a marvellous villain, easily up there in the pantheon of great human Doctor Who baddies and his treatment of Barbara is far darker than it could ever have been on television. You can always tell if someone is a baddie in those early days as they all got the hots for poor Barbara!

This was an excellent book, one that has finally been re-printed and easily purchasable from Amazon and various book shops. One I would recommend if you are unsure where to start with all the Doctor Who novels currently in circulation. Also, if you have one of the first editions of the book from the 1960's tucked away somewhere, it could be worth anything up to £400!