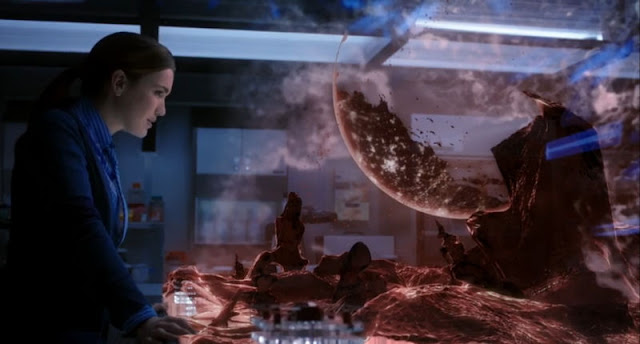 So Ward and May were totally doing it?! At the end of the previous episode, it was inferred that this the first time they had done the deed together but as we find out, it isn't. Their being together is the coupling that makes the most sense at the moment being as they both seem to have souls which are broken. But their relationship isn't the centre of this episode as it focuses more around a woman who was caught in a particle accelerator explosion, (no, not The Flash), who is being haunted by a man who fancied her who was teleported to an alien planet. I will admit that this storyline does feel a little juvenile for a show that is situated right in the middle of the Marvel Cinematic Universe but doesn't want to give us any stories that might influence those major movies.

This episode was written by creators Josh Whedon and Maurissa Tancharoen and with most shows, episodes written by the show runners are an indication that things are going well and the series is moving forward. Unfortunately, this episode does nothing to further the series' plot. Like many Agents fans, I think that these sorts of episodes don't help the show and the lack of an overall story arc is ruining the season, there isn't even a consistent villain yet. The investigation elements of this story aren't interesting because there is little investigating going on. When the ghost thing smashes a wrench into Fitz and Simmons's console I was immensely pleased as it meant that there might finally be a little bit of a story after all.

What particularly effects this episode is that when the team find out that Hannah Hutchins might have telepathic powers, they dismiss it immediately saying there is no such thing. Obviously this was done because Marvel doesn't currently own the X-men movie rights but in a universe where a man turns into a green monster whenever he gets angry, how can they dismiss it so quickly? What also bugged me about this one is that the idea of someone being telepathic is wacky but a man who is teleported to an alien planet and still manages to haunt the woman he fancied isn't?

Both this episode and the previous one have seen a distinct drop in story telling quality than the first seven. This is partly because the show is still finding its feet but with the events that were going on in the movies at the time this season was broadcast, it felt like this show was going to fall behind. The only good thing about this particular episode was that we learnt how Melinda May got the nickname, The Cavalry. But rather than giving us that story, the series gives us this. I also liked the cute little moment were Fitz screams as the mop person he made to scare Skye makes him jump instead.

On the whole, I really enjoy Agents of S.H.I.E.L.D. and I am pleased it has managed to last for three seasons and been commissioned for a fourth, but it was episodes like this that put the show in serious trouble. It was a good job that the quality picked up again not long after this...