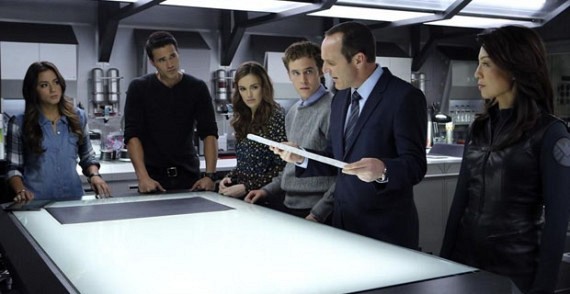 I will admit I was quite mad when I finished this episode. I was mad because the whole thing was quite deceiving, promising to be a tie-in or follow on from Thor: The Dark World but after the beginning the episode had nothing to do with that movie whatsoever. In fact, this episode could have been done at any point through the season without tying it to the Thor movie because the Asgardian weapon they have to face had nothing to do with The Dark World.

For an episode promising something along the lines of The Dark World, lets take a look at what we have. An Asgardian staff that gets stolen by a couple of Swedish rock fans judging from the hair. These villains get no backstory whatsoever but they do get super strength but it also makes them super aggressive. Maybe they were already aggressive given that they belong to an Asgard Pagan society but this is something else the script fails to delve into and they hate neither Norse or Pagan people, just people in general.

The team is tasked with tracking them both down and stopping them before they hurt anyone else, but all they seem to do for the first half of the episode is chat about how handsome Thor is. Alright, that's true, Thor is handsome but surely they should be out there saving people? Speaking of Thor, this would have been a great opportunity to have someone from those movies guest starring. Maybe Sif, Volstagg, Heimdall or Fandral? Hell, I'd settle for Thor himself but we don't get anyone and it feels like a wasted opportunity. We do get an Asgardian, someone who once wielded the mighty staff but I don't think he is someone from the comics.

This character is played by Peter MacNicol, someone who I understand is a famous actor, not that I've ever heard of him, but he doesn't get the best material and he doesn't come across very well. In fact, considering he was once one of the Berserker warriors who wielded the staff, it's sad that all he gets to do is sit around and talk.

This episode decides to focus around Grant Ward played by Brett Dalton. It gives us haunting glimpses at his past but there not that haunting and Dalton appears to not be up for giving us some fairly decent acting here either. He had been really good in the previous episodes but here, the quality of his acting dips drastically. There is a hint at flirtation here between Ward and Skye but as sparks had hardly been flying in the previous episodes, it seems a little odd to bring it up here. Ward does get a good moment between himself and Melinda May who end up sleeping together at the end because they both harbour dark feelings. I will be surprised if this leads to anything interesting at it feels like there is no attraction between the two of them.

And had the episode been pointing in a more interesting direction I may have been interested at the end where Coulson wakes up from a nightmare about Tahiti. This is another odd moment in an odd episode because nothing untoward is occurring in his nightmare, in fact, it seems like quite a pleasant dream. It is just a shame that the whole Coulson died and came back to life thing feels like its being dragged out slowly and its got boring now. I think it's time that Season 1 wraps up this storyline as it isn't that interesting anymore...