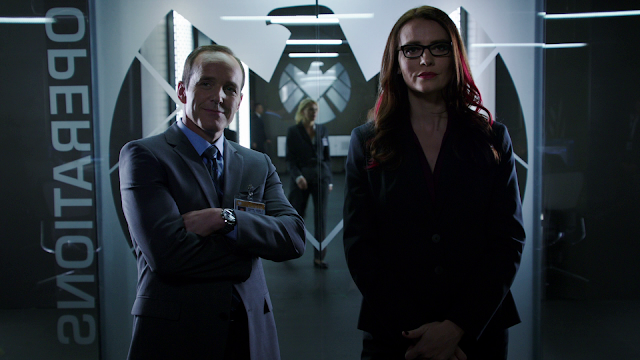 The Hub is an entertaining episode. It isn't as good as some of the others that have come before it but it was nice to see some of the events of the previous episode overflowing into this one. Simmons' alien virus she contracted in the previous episode is mentioned a couple of times as is Fitz's inability to put on a parachute, which he takes out on Ward. It is obvious that Fitz is jealous of Ward who he seems to see as a rival for Simmons' affection. But, while Ward did save Simmons, I think that we know she only has eyes for Fitz, so I hope this petty jealously is wrapped up pretty quickly.

But this episode managed to put an end to that jealously with Ward and Fitz having to go on a mission together. It is clear from the outset that neither of them are thrilled about it, especially Ward who questions Coulson about Fitz's ability to be a Shield agent when a set of glass doors close on him. The sequence is pretty funny but I feel that Agents still needs to iron out the amount of humour, something else which this episode begins to do, pushing the series in a more serious direction. That what did annoy me was Fitz's continual complaining about Ward throwing away his sandwich, for god's sake Fitz, he was trying to save your life, more than I would have done when he annoyed that much.

This episode was also packed with Marvel Easter eggs, without thankfully, mentioning or referencing the Avengers. We had a little cameo from Agent Sitwell, a character from the comics. It was also nice to learn that he is Jasper Sitwell a Hydra agent, perhaps this is a little inclination of what is to come? But it was also great to see Victoria Hand appear here, it was a nice little appearance as, at the time of this episode's broadcast, she had just been killed off in the comic books.

Hand comes across as being a little too uptight in the beginning but it is no surprise as she finds out that Skye has been hacking Shield and that Simmons shoots Sitwell with the Night-Night gun. She also essentially sends Ward and Fitz on a suicide mission, something she hadn't mentioned to Coulson but is alright in the end when she sends in help.

The episode also does move the overall story along with the discovery that Skye's mother was a Shield agent who died on a mission. And Coulson finally works out that something is seriously wrong with him and his continual magical place description of Tahiti and begins to look into what happened to him after he was killed by Loki.

Ming-Na Wen continues to excel as Melinda May and her deadpan way of saying things makes her serious character hilarious. But I do feel it is time for the show to delve more into her background but wait until they have tied up the current mysterious background storylines that they having going on simultaneously.

Overall, The Hub has its ups and downs but it does a good job at developing it's characters a little more, though Fitz got on my nerves a little in this episode. It was also good to see more characters from the Marvel Comics being introduced to the wider cinematic universe and it offers us some hints at possible things to come...