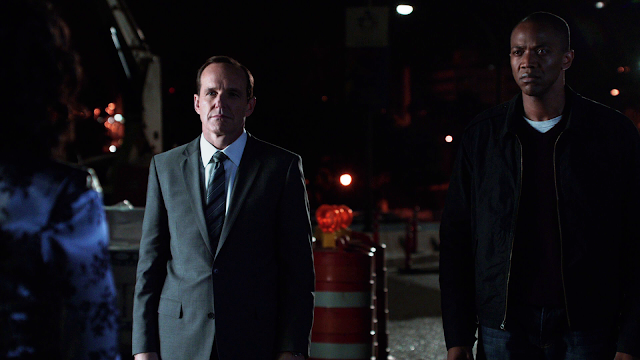 At the time of it's first broadcast, The Bridge was believed to feature numerous characters that had been introduced in previous episodes and be the series' first two parter. Unfortunately that wasn't meant to be. I was really hoping for this episode to be something truly kick-ass. Unfortunately, that wasn't to be either. While it continued the trend that started a couple of episodes to make fairly decent episodes, it did stop the show from kicking itself up a notch to the level that it could achieve.

It was nice to see Mike Peterson again played by J. August Richards who did a terrific job in the pilot. It was also nice to meet the mysterious Raina, last seen in The Girl in the Flower Dress. This episode gives us some nice little hints at what may happen for the foreseeable future of the first season and the organisation Centipede has obviously upped their game. But the show still hasn't answered important questions about that aspect. Who are Centipede? What do they want? How will they affect the series and possibly have ramifications in the wider cinematic universe? These are things we need answered if we are to take them as a more credible threat. There is also the Clairvoyant's presence looming over Shield's shadow, but who is he? I certainly hope he isn't the newly introduced Edison Poe as he was tremendously dull. I also hope we get to meet the mysterious Clairvoyant soon.

I am also thinking that the name, Clairvoyant is just his title and not a nod towards what he can do, considering that Agents is trying to make it known that psychic's don't exist in the cinematic universe. But it is their disbelief that is annoying me, in a world where a man can turn green when he gets angry, how difficult would it be to believe that someone could possess psychic powers?

What I also wish would happen was that something occurred that made me more sympathetic towards Skye's plight. Her character can grate on my nerves sometimes and I just felt more like rolling my eyes when she began to cry in her room that feeling any sorrow for her.

But Coulson and Mike get the best scene here which played wonderfully by actors Clark Gregg and Richards where they discuss Mike's son and how that parental responsibility makes it unsuitable for Mike to join Shield. Also nice to hear was a little mention of Coulson's cellist girlfriend for the first time since The Avengers. I hope this is an avenue that the show explores in future episodes.

I'm still not too sure about the Ward/May dynamic as it doesn't feel quite right despite being the best team dynamic in the show. There was a fun little scene where Ward is trying to flirt with May while they are sparing and she does her whole ice queen thing. Also a good little bit was when she gets angry when Ward takes a punch for her in one of the fights.

What was suprising though was the revelation that Mike had made a deal with Coulson to turn him over to Centipede so that Mike could get back to his son and stay off the radar. What seemed like a betrayal was something organised by the two of them to save one little boy and was a touching moment. But the ending did come as a real surprise with Mike handing his son over to Skye and running back to save Coulson only to be caught in a prepared explosion from Centipede. It seems for now that Mike is dead and with Coulson taken, how will the remaining characters get out of this one?