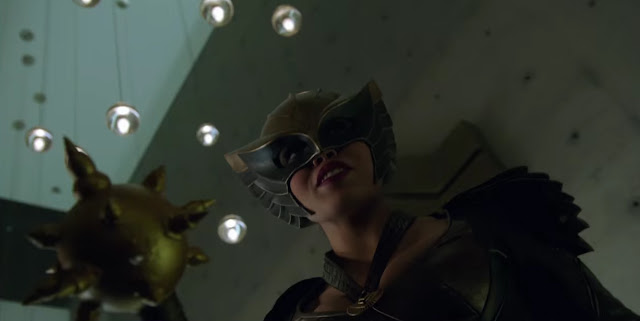 Over here in the UK, Legends still has a few more weeks before the first series comes to it's conclusion, though you would be forgiven for not knowing this when watching this, the latest episode. Leviathan is the episode that has relied on visual effects the most so far in this season, at one point will two giants battling each other. Overall this episode was big, exciting, entertaining and everything the series needed to build the momentum it now needs for the series finale.

Facing the ticking time bomb that is Vandal Savage, Rip and the team have no choice but to go back to 2166 and try to stop him when the madman is at the height of his powers. But, if the team couldn't defeat him all those times they engaged him in the past, what hope did they have when his powers at their height? But it turned out that Savage's daughter Cassandra and her bracelet, something that Kendra had worn in her first life in Ancient Egypt where just the things the team needed to take Savage down.

In the comics, Vandal Savage has a lot of children, (some people just can't keep it in their pants), but there were very few that actually qualified as main characters. The two who did were Scandal Savage and Kassandra Sage and Cassandra Savage appeared to a composite of those two characters here. Throughout this series, something that hasn't felt right is the characterisation they gave Savage, I.E, he had none. But here, by giving him some form of human connection, beyond his stalker like one with Kendra actually works in his favour, fleshing out the character a little bit more. Although he still is suffering from Casper Crump's performance, the character gets a couple of good moments here especially when he realises that he has been betrayed by his beloved daughter.

But it wasn't only Vandal Savage who suffered from an actor's performance. Cassandra too suffered slightly from the performance from Jessica Sipos. Unfortunately she comes across a little bit too stiff and robotic, especially when it comes to delivering her lines. I suspect at the time, it was an intentional choice as anyone brought up by Savage isn't going to normal and gradually, over the course of the episode she comes out of her shell a little. This was helped greatly by her relationship with Captain Cold and they both bonded over their daddy issues. But her whole character development feels rushed here, just how did someone like her become swayed by Rip and his team from a conversation and by seeing three seconds of video footage?

But it is hard to think about what else could have been done to better her character. Perhaps if she had been introduced a little earlier in the series then her betrayal of her father at the end would have carried more emotional weight.

However, this episode feels like it is finally taking the right steps to end Savage's reign of terror. Instead of facing him in the little field trips they had embarked on earlier in the season, here they take the fight to Savage and manage to nearly rid the world of his tyranny forever.

And everything here felt like a series finale. There was a great sense of desperation in the characters dialogue and actions in all their subplots. Rip is obviously in a state about being so close to his own family but knowing he can't ever save them. Kendra is rightly concerned about taking on Savage by herself since Hawkman is dead and the rest of the team come to the aid of a band of rebels and refugees and end up drawing the wrath of a giant robot down onto them. 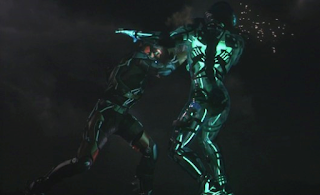 It is the battle with the robot that is this episode's 'wow' point. The producers could have skimped out and saved money here by having two actors in suits knocking over cardboard buildings but they didn't and the sequences are all the better for it. Alright, the battle between Ray and the robot Leviathan didn't look entirely convincing but it brought across the power and brutality that two men, wrestling in rubber suits could never do. The problem I did find with this battle sequence and that was that people still think that the bigger something is the slower it moves. When Ray pulls some judo move on the Leviathan, the robot flies through the air in what looks like really slow motion. Surely something that big would move faster?

But it was Kendra who got the most satisfying moment of the episode in her battle with Savage where she finally brought him to his knees and nearly killed him. Obviously there are still three episodes left so she couldn't finish him off but she knocked him about a bit! Rarely in this show have seen how vicious and bloodthirsty this character can be and it was great! It was really refreshing to see her as truly bad-ass as she was meant to be.

It was a shame that it was that moment that the writer chose to bring back the reincarnated Hawkman in the form of one of Savage's brainwashed soldiers. I would have liked to see Kendra deliver the killing blow to Savage but instead she stops just as she is about to bring her spiked mace down on his head. Instead she choses to spare him and keep him captive in their time ship in a hopes she can bring Carter back. Surely she could have killed Savage and still brought Carter back?

But one can hardly blame Kendra for being a big buzzkill as the series still has three episodes left. Obviously with a few episodes still left then victory was never an option but this episode brought up a problem with the premise of the series. It has been established that the only way that Kendra and Carter will be free from Savage is by killing him but, characters like Professor Stein have repeatedly said that they are above killing someone, no matter how bad they are. So, how then, if they can't bring a spiked mace down on Savage's head are they going to get rid of the character that keeps the others along the lines of their comic book personas? And, isn't removing Savage from time and imprisoning him in their ship no better than effectively killing him or was it just me who thought that?

I am however excited to see the ramifications of Kendra's decision and how it will effect each and every member of the team. It was clear that Rip wanted to smash the mace down on Savage himself. But over the course of the series, he has learnt to trust the judgements of his teammates and alright, Kendra's actions may have endangered the human race again but no doubt it will be her mercy that will be the team's redemption.