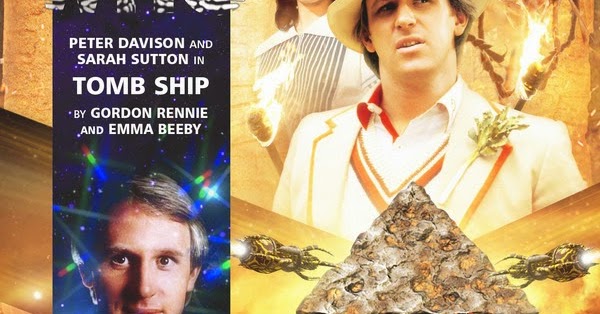 Tomb Ship finds the Fifth Doctor and Nyssa arriving on a spaceship that is actually a giant floating tomb.

The tomb is the final resting place of an ancient Arrit-God King, a member of a species the Doctor says could have rivalled the Time Lords, the tomb is riddled with traps and puzzles all of which are potentially fatal.

As always, the pair are not alone. Also on board the floating tomb is a family of tomb raiders who want to steal the god's loot. They consist of a mother and her sons, the mother is completely single minded and is prepared to sacrifice anyone to get what she wants. But she also keeps dark secrets, the most dangerous of which is the identity of the woman whose embittered voice hectors the party at every single turn.

Tomb Ship features an unusually large cast and because of this, we expect all the sons to be easily confusable. But each one is characterised, one is nervous, one is gun-ho while another is sceptical. They are easy to tell apart and their mother is easily detestable, which is great!

The Mother, Virna is paired with the Doctor for most of the story and everything she does makes the Doctor boggles at the lengths she goes too to get what she wants.

It is a long standing Doctor Who tradition that it is the companion who is taken hostage to ensure the Doctor's co-operation. But here it is done in a way that is humorous and makes us roll our eyes with Nyssa. Of course, ever resourceful Nyssa doesn't remain a hostage for long and over the course of her time with Big Finish, Nyssa has developed a real sense of humour which is great to listen too.

It is also nice to hear the Fifth Doctor working out the answers to all the puzzles and challenges in a way which emulates Indiana Jones and puts us in mind of his time spent in the city of the Exxilons in Death to the Daleks.

Perhaps the most suprissing moment in the play comes at the end of episode 3 where Hannah Bartholomew, a character from the previous adventure Moonflesh arrives. She explains how she stowed aboard the TARDIS and got lost, much like Tegan in Logopolis. There is also a mention of the HADS, the Hostile Action Displacement System which was first mentioned in The Krotons and recently in Cold War.

Tomb Ship is one of the most exciting audio adventures I have heard in a long time where writers, Gordon Rennie and Emma Beeby deliver a tale that is surprisingly simple in it's format but it is that simplicity that makes it so entertaining.

But what truly sells the story is the fantastic audio and sound design from Richard Fox and Lauren Yason which makes us feel that we are a part of that vast ship, it really helps to ramp the tension up to eleven!

TOMB SHIP, WRITTEN BY GORDON RENNIIE AND EMMA BEEBY AND STARRING PETER DAVISON AND SARAH SUTTON WAS RELEASED BY BIG FINISH PRODUCTIONS IN MAY 2014.