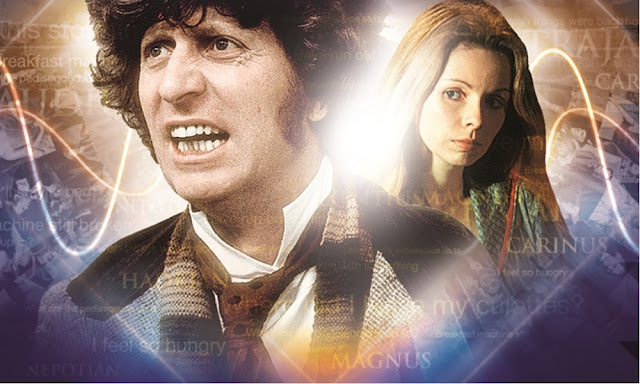 With the fourth release in the Destiny of the Doctor audio series, we get another adventure with the Fourth Doctor. Of course, Tom Baker has been recreating his role of the Fourth Doctor with Big Finish for years before this release so here, they give us a pairing that we wouldn't have had until recently. This story sees the return of Lalla Ward as Romana alongside her Doctor.

Despite it's eighties feeling title, Babblesphere feels like a love letter to the late seventies adventures when the series was under the gaze of script editor Douglas Adams. In fact, from the moment it starts and we get the description of the planet with the volcanic wasteland back masterfully with music from Steve Foxon, you can imagine the model shot, something along the lines of City of Death. We then travel inside the city and a man dies shortly before the TARDIS, as it always does, arrives. Author Jonathan Morris has dominated recreating this era of the show since his first novel Festival of Death and he continues to nail the feel of the show in this time. And Ward is a great reader.

The reason Babblesphere works so well is that it is a modern way of telling a seventies story at the expense of modern social media. It would fit nicely in series 17, a series that is a bit of mixed bag, it can range from mind-blowing to mind numbing and has a Hitchhikers Guide to the Galaxy feel to it with its humour and because of this it is a great deal of fun.

Like many of the best stories that just feature the actor who played the companion I feel that this story could have been spectacular had Tom Baker been there to say his lines alongside Lalla Ward, I can only imagine how fun it would have been to listen to their bickering over the fact that both of them had left their sonic screwdrivers back in the TARDIS!

Lalla Ward not only successfully recreates her role as Romana but she does a good job of creating the image of the other characters in our mind. Sure, the ending is as predictable as they come but it was nice to hear a future incarnation of the Doctor turn up with a suitable in-joke.

As I gradually purchase these releases, I think this is the best Destiny of the Doctor adventure I have heard so far, it fits in nicely like one of the better stories from Series 17 and Jonathan Morris continues to excel at recreating this era of the show!

BABBLESPHERE, WRITTEN BY JONATHAN MORRIS AND STARRING LALLA WARD AND ROGER PARROTT WAS RELEASED BY AUDIOGO IN 2013.